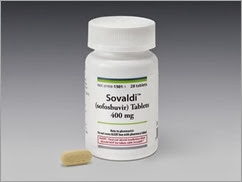 Sofosbuvir, with the brand name Sovaldi, is among new medications changing the treatment of hepatitis C.(Photo: Gilead Sciences Inc.)

John Billeris has tried and failed four grueling rounds of treatment for his chronic hepatitis C infection over the past 15 years. He is not convinced that his fifth try — with what he jokingly calls "magic medicine" — will be the charm. But he says the three-drug regimen he started on Christmas is definitely easier to take.

"I saw the doctor a couple of weeks ago… and I told him this (stuff) is not working because I don't feel anything," says the 59-year-old semi-retired real estate agent from Oyster Bay, N.Y. Since then, Billeris says, he's developed a familiar "anemic feeling," but still nothing like the persistent flu-like symptoms he has endured in the past.

That's because Billeris' new treatment does not include one drug that, until now, has been essential for patients like him: interferon, a medication known for causing fevers, headaches, fatigue, mood swings and other unpleasant and sometimes dangerous side effects. It does include two drugs approved by the Food and Drug Administration in late 2013, sofosbuvir from Gilead Sciences, Inc., and simeprevir from Janssen Therapeutics.

Those medications, and others the FDA is expected to consider soon, are part of what experts are calling a revolution in treatment for 3 million people in the USA chronically infected with hepatitis C, the nation's leading cause of liver cancer and liver transplants.

Changes in treatment are coming so fast that several medical groups on Wednesday took an unusual step: posting preliminary online treatment guidelines that will evolve as more medications become available.

Those medications could soon eliminate the need for interferon injections for most patients. They also are expected to make treatment faster, easier and more effective than older regimens, which last at least six months and succeed about 75% of the time, experts say.

"The ideal would be a single pill once a day, for eight or 12 weeks, with success rates of greater than 90%," says Donald Jensen, a liver disease specialist from the University of Chicago and co-chair of the committee behind the guidelines posted at HCVguidelines.org by the American Association for the Study of Liver Diseases, the Infectious Diseases Society of America and the International Antiviral Society-USA.

While single-pill therapies are not yet available and the FDA has not yet approved an interferon-free regimen for the majority of patients, the experts say doctors can combine drugs on the market to get faster, easier, more effective treatment for many patients who need care now. In some cases, that will mean using combinations not explicitly approved by the FDA — including the interferon-free cocktail Billeris is using. The guidelines say it is an option for hepatitis C patients with genotype 1 (the most common strain) who can't tolerate interferon or have certain conditions, including depression.

The guidelines don't carry the same weight as those that go through formal reviews to be published in medical journals, "but we are saying that if these were our patients, this is how we would handle them," says committee co-chair David Thomas, a liver specialist at Johns Hopkins School of Medicine, Baltimore.

The guidelines will be "enormously valuable" in convincing more insurers to cover the very expensive emerging treatments, says Douglas Dieterich, a liver specialist at Mount Sinai Hospital, New York. He says some have been refusing to pay for the combination of sofosbuvir, which costs $84,000 for 12 weeks, and simeprevir, which costs $66,000 for 12 weeks, according to manufacturers.

The prices for the new drugs, especially, sofosbuvir, at $1,000 a pill, also have drawn criticism from patient advocates who say high prices will limit access in the USA and worldwide.

"Gilead is exploiting the fact that this is essentially a cure for a deadly disease," says Michael Weinstein, president of the AIDS Healthcare Foundation.

Gilead believes the price of sofosbuvir "is fair, based on the value it represents" to patients, company president John Milligan said in a statement. Most private insurers are covering the drug in FDA-approved combinations, he says, and the company is working with Medicaid and Medicare to set terms for access under those plans. The company also has an assistance plan for uninsured patients and those who need help with co-pays.

The new expert guidelines "are not designed to address cost," Jensen says. "Our recommendations are based on what we think is best for patients."

The new guidelines also do not say which patients doctors should treat now and which patients can wait — a crucial issue since hepatitis C can cause varying degrees of harm and take decades to cause symptoms. A future version will address that issue, Thomas says.

Many people don't even know they have the infection. But the federal Centers for Disease Control and Prevention says it is so common among Baby Boomers that everyone born between 1945 and 1965 should be tested. The virus spreads through shared needles, birth and, sometimes, sex. About 5% of people with chronic infections eventually die of cancer or cirrhosis, the CDC says.

Getting tested is especially crucial now, Thomas says. "All the major advances in treatment are insignificant if a person doesn't even know they have the infection."

Of course, those advances in treatment still need to pass the test of real-world use — a test that some previous medical advances have failed. Billeris, for one, says, "I'm not optimistic — but I am hopeful."

Posted by Hepatitis C Research and News at 1:37 PM