Hepatitis C: How might the new AASLD/IDSA recommendation impact the category?

The HCV category is certainly dynamic enough, with numerous agents poised for approval in the next 18 to 24 months. Still, the release last Wednesday of the AASLD/IDSA Recommendations for Testing, Managing, and Treating Hepatitis Cadded another variable for payers and manufacturers to consider before determining their strategies. The recommendations were both confirmatory and surprising and it remains to be seen how payers will ultimately integrate them into management.

The Recommendations fully endorse new oral agents as the standard of care, advocating sofosbuvir first among treatment-naïve, genotype 1 patients who are eligible for interferon, followed by a simeprevir-based regimen as an alternative. The panel made a comparable recommendation for genotype 4 patients, then endorsed sofosbuvir for treatment of patients with genotypes 2 and 3, per label. Endorsements for telaprevir and boceprevir-based regimens were withdrawn as being “markedly inferior to the preferred and alternative regimens.”

However, not all endorsements followed the obvious path, namely those for patients intolerant to interferon. Labeling for sofosbuvir permits usage “in combination with ribavirin for 24 weeks . . . for CHC patients with genotype 1 infection who are interferon ineligible.” Nonetheless, the AASLD/IDSA made its primary treatment an off-label regimen of sofosbuvir plus simeprevir in combination for treatment-naïve, interferon-ineligible genotype 1 patients. It’s a safe assumption the panelists were impressed with the 90%-plus SVR rates achieved in the ongoing phase 2 COSMOS study, but it’s less clear payers will hold the same opinion.

Early research from the Hepatitis C Impact Monitor, a multi-stakeholder view of this rapidly changing area, published by Zitter Health Insights, indicates a majority of payers (52%) hold the guidelines as meaningfully or significantly influential on their determination of utilization management of the HCV category.  By itself that finding would indicate positive coverage of the sofosbuvir/simeprevir pairing.  But an even larger majority of the same payer sample, this time 80%, indicated they’re more unlikely than likely to cover those drugs in combination.  But that was before the guidelines were released.

To begin developing an understanding of how payers and doctors expect to change their behavior as events occur, we asked four pharmacy directors from national payers (in aggregate representing approximately 25 million commercial lives) how they anticipate their organizations will react.  While it’s still early for many to have determined final policies, reactions were evenly split.  One participant commented, “We try to support evidence based guidelines, but, the evidence is not there to support use at phase 2.  We’ll need more evidence development.” However, another pharmacy director was more resigned, commenting, “We won’t have a choice.  There’s no way to combat the recommendation.”
Combat may be a strong word, but may not be far from an accurate description because physicians appear on board. Prior to publication nearly a majority (47%) of specialists were more likely than unlikely to prescribe the combination. We expect those figures to increase because seventy-three percent of them grant the guidelines meaningful or significant influence in their prescribing decisions.

Perhaps beneficially for pharmacy directors, the conundrum about off-label sofosbuvir/simeprevir coverage comes with an expiration date. The AASLD/IDSA includes the caveat that “This regimen should be considered only in those patients who require immediate treatment, because it is anticipated that safer and more effective IFN-free regimens will be available by 2015.”  Which means payers will have new guidelines to digest upon the approval of Gilead’s sofosbuvir/ledipasvir, or of AbbVie’s triple therapy, or of Boehringer’s faldaprevir/deleobuvir. In the interim, payers will weigh the nature of Phase 2 results against the imprimatur of the AASLD.  Each of the four pharmacy directors we spoke with on Monday indicated their organization is currently reviewing the Recommendations document but hadn’t yet made a final policy determination.  Zitter’s Hepatitis C Impact Monitor will continue to examine the changing HCV landscape, providing timely, deep insights into non-clinical factors that influence agent access and adoption. 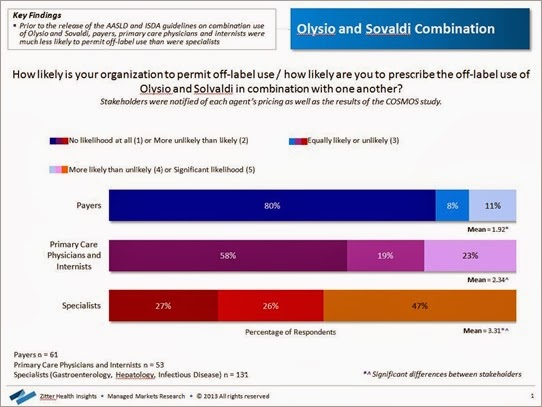 Posted by Hepatitis C Research and News at 1:51 PM