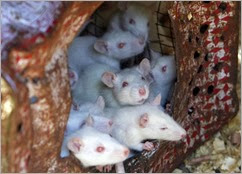 University of Michigan School of Public Health researchers found liver tumors in mice whose mothers were exposed to the chemical BPA.

Bisphenol A or BPA is a chemical used in plastics and epoxy resins. The chemical is found in many products including water bottles, cups and impact resistant material. Compact discs Epoxy resin is used to coat metal products such as food cans, bottles and cup.

Previous research has shown that BPA can affect fertility in animals. A related study on mice had linked the chemical with prostate cancer in the rodents.

The study shows a direct link between BPA and cancer. The mice in the study were exposed to the chemical during gestation and nursing.

For the study, researchers fed female mice with food containing BPA. These mice were then allowed to mate and were given one of three chemical doses (50 µg, or 50 mg of BPA per kg diet) during gestation and nursing.

The scientists then followed one male and female mouse from each litter and tracked their growth for ten months.

They found that mice whose mothers were exposed to 50 mg of BPA per kg diet had seven times higher risk of developing liver tumor than other non-exposed mice.

"We found that 27 percent of the mice exposed to one of three different doses of BPA through their mother's diet developed liver tumors and some precancerous lesions. The higher the dosage, the more likely they were to present with tumors," said Caren Weinhouse, U-M doctoral student in the School of Public Health's Department of Environmental Health Sciences and first author of the paper, according to a news release.

Also, researchers found that BPA didn't discriminate between male and female. "In general, females are at lower risk of spontaneous development of liver cancer," she said in a news release. "That distinction was erased in this study, with both males and females showing tumors."

The study is published in the journal Environmental Health Perspectives.

Posted by Hepatitis C Research and News at 8:00 AM