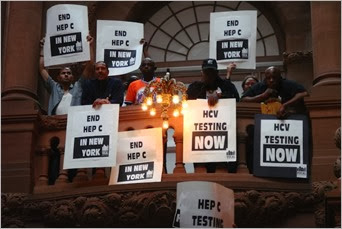 Vocal NY/City Limits
Advocates from Vocal NY called for more aggressive action against Hepatitis C at a lobby day in Albany in June.

Deadlier than HIV, the disease can appear years after infection, and testing and treatment are complicated. The city's Action Plan draws praise, but advocates want more resources applied.

Although the Hepatitis C epidemic receives less than three percent of the federal funding given to the fight against HIV/AIDS, it is the most common chronic blood-borne infection in the United States today—and the deadliest.

Since 2007, the New York City Department of Health and Mental Hygiene reports, Hepatitis C (HCV) deaths in the nation have been increasing yearly and have surpassed those from HIV/AIDS. Nationwide, of an estimated 4 million infected with HCV—almost four times the number believed to be infected by HIV/AIDS—around 85 percent are chronic carriers of the virus. Because 80 percent of infections don’t show signs for decades, treatment for HCV is often delayed, allowing the virus to replicate and undermine liver function.

In New York, at least half of those with HCV don’t know they are infected. In the nation the figure is estimated to be closer to 75 percent. There are an estimated 146,000 infected people in the city. But limited surveillance may have obscured the true picture of viral incidence citywide—it could be significantly higher.

The city's health department, or DOHMH, is mounting its first-ever campaign to reduce illness and death from HCV. But due to a lack of financial commitment—particularly from the federal government—the city and healthcare workers find themselves limited in what they can do.

While viral hepatitis comes in many forms, acute or chronic, all types inflame the liver. Hepatitis A, for instance, is transmitted by eating contaminated food or drinking tainted water. It tends to be acute, meaning people get over it after a short illness. Hepatitis B is spread via blood, semen and saliva and is often chronic, through there is a vaccine.

In New York City as around the country, HCV disproportionately affects people of color. Blacks are much more likely than their white counterparts to be admitted into hospital with complications from the virus.

Because HCV is carried by blood, people who inject drugs represent the single biggest risk factor for infection. Among IV-drug users, HCV is more easily transmitted than HIV. Worldwide, 10 million intravenous drug users carry the virus. An estimated 70 to 80 percent of the 35,000 new HCV infections occurring in the United States each year are among people who inject drugs, according to the National Institute for the Study of Drug Abuse. Drug users who also drink a lot of alcohol, which is common, are at special risk for liver cancer from HCV.

HCV has a heavier viral load than HIV, giving it staying power on surfaces and making paraphernalia a key source of transmission. “Cookers,” (the metallic spoon on which heroin is heated so that it liquifies and can be injected) are of particular concern, as is shared cotton. A straw used for sniffing cocaine is also a risk factor due to contaminated mucus.

Due largely to drug abuse and tattooing, Hepatitis-C infection is the leading blood-borne virus in American prisons, and high incidence is reported among the estimated 90,000 inmates at Riker’s Island correctional facility: 10 percent of Rikers detainees had preexisting HCV infection, though an additional 10 to 15 percent of inmates are likely to carry the infection but don’t know it.

While needle-exchange programs have helped reduce HCV transmission in the city, experts say education programs are still urgently needed. Patient outreach for this population that links them with care is also seriously understaffed and underfunded.

Of the city’s more than 100,000 heroin users, HCV prevalence is estimated by the Health Department to be 50 percent. The Bronx had the largest number of new infections in recent years. According to the Health Department, in the South Bronx and East and Central Harlem, only 40 percent of New Yorkers with HCV have been evaluated by a doctor for possible treatment.

As many in doctors’ offices around the city have been learning, something a patient did decades ago but has forgotten, like sharing a dirty needle or a soda straw, can eventually come back to haunt them in the form of HCV. While most infections today and from the 70s stem from IV drug use, blood transfusions before 1992 are also a major risk in transmission.

A professor of medicine at Columbia University, Dr. Robert Brown isn’t seeing an epidemic of new cases of HCV, but “an epidemic in new cases of liver disease” in people who've had the virus for some time and are now feeling its worst effects.

In one week this fall, he saw two patients who will die in six months from the liver complications caused by the virus. While the epidemic hurts the poor disproportionately, he sees patients from all walks of life infected with the virus – often “with a spouse, a family and a good job,” he says. He says the likelihood of thousands dying in coming years from infection is a “conservative” estimate.

There are drug therapies that cure HCV, but they stand a far better chance of working if started before a patient develops serious complications.

The push for testing

Testing for HCV is a two-step process. A preliminary antibody test determines whether a patient has, at some point in their life, been exposed to the virus; a rapid version of this test is available that gives results in 20 minutes.

A second test is required, however, to confirm the infection before the patient is linked to treatment, much less likely to happen if you are poor and an IV drug abuser. Because of a lack of health insurance coverage, the second test is not always available.

A recent report from the Centers for Disease Control (CDC) spelled out this danger. It found that of close to 220,000 newly documented cases in the country from 2005 to 2011, only half received follow-up testing, presumably due to a lack of health insurance coverage. And the percentage of deaths among persons who received only the HCV antibody positive was significantly higher than those who received the follow-up test.

HCV-related deaths jumped by nearly 50 percent from 1999 to 2011, when there were 16,000 deaths. HCV is the leading cause of complications from chronic liver disease, according to the U.S. Preventive Services Task Force (USPTF), and its impact is not expected to peak for several years. The virus is also a leading cause of liver transplants in the United States.

Nationally, close to 75 percent of total HCV infections are among baby boomers; 1 in 33 of them is estimated to carry the virus. Only recently, the CDC changed its guidelines to include one-time HCV testing for all persons born between 1945 and 1965 regardless of other risk factors.

Recently Gov. Cuomo made New York State the first in the nation to mandate testing for baby boomers.

In a 2013 article in Hepatology, Dr.Brian Edlin, Associate Professor of Public Health and Medicine at the Weill Medical College of Cornell University, says that mandatory testing—if imposed nationally—may detect more than a million new cases in the country and save at least 100,000 lives.

But even among those diagnosed, according to a recent report by the DOHMH, too few are offered treatment. With a lack of funding for patient outreach, the infected IV user in the city—who may suffer from other risk factors like alcoholism, homelessness or mental illness—may never get linked to care.

A response to the epidemic, DOHMH'S Action Plan is “the first ever aimed at reducing illness and death from the epidemic.” According to the plan, the city is facing an “anticipated wave of HCV-related illness, leading to billions of dollars in health care costs and lost productivity."

But the plan can blunt all that, says a hopeful Health Commissioner Dr. Thomas Farley.

It also aims to “enhance linkage to care for persons with current HCV infection” and “[build] clinical capacity to manage and treat HCV.”

Because insurance plans can present even more barriers to care, the federal Affordable Care Act promises to extend care for many more and improve treatment and survival rates. “Game-changing” drugs should also substantially change the whole landscape, says Sean Barry of Vocal-New York.

But without more funding some are skeptical that those changes will have much effect. While admiring of the Action Plan as a way forward, Brown says much more money is needed for comprehensive testing and treatment. An optimist, he agrees with Farley that new medication, which is easier to tolerate, will improve treatment and is just around the corner. But with inadequate funding for testing and treatment, “What good are the new drugs if you can’t find the people?” he asks.

Daniel Raymond, policy director at the Harm Reduction Coalition, agrees. Without the money to support it, Farley’s plan is “aspirational,” he says. On top of federal dollars, the city needs to make a serious cash injection as well.

A desire for more

According to the health department, nearly $3 million from the government and private sector has been spent by DOHMH in the last three years to fight viral hepatitis, including HCV.
This does not including funding for syringe services or for persons co-infected with HIV and HCV. The DOHMH is also “working to mobilize additional funding to implement all the elements of the plan.”

The health department’s Action Plan comes on the heels of its “Check Hep-C” initiative begun in May 2012 and terminated one year later. The project was funded by the pharmaceutical industry, with some staffing assistance from the city. Just under 5,000 people were tested and 512 were found to be infected. Of the 31 percent who kept an appointment at a clinic, just over half received a medical evaluation to determine if they should begin treatment and 11 initiated treatment, a spokesperson for the health department says.

“Linking patients to treatment,” the spokesperson says, “is one of the most challenging aspects of the hepatitis-C epidemic."

The health department says it has received funding for a second year of Check Hep-C.

For many researchers and analysts, a lack of political will explains the “anemic” response to the disease citywide and across the nation, Raymond says the high prevalence of the disease among intravenous drug abusers explains in large part why politicians have given the epidemic little attention.

Council-member Annabel Palma, who lost a family member to the disease, asks, "Are all the elements in place to effectively combat the hepatitis C epidemic?”

Her answer: “No. But with the work of the state Medicaid Redesign Team and the new Action Plan by the city Health Department, I believe that we are heading in the right direction.  I only hope that the action plan finds support in the next mayoral administration."

Posted by Hepatitis C Research and News at 9:26 AM