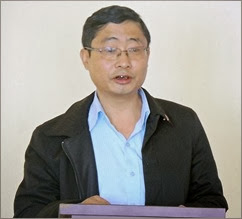 In his speech, Sentiyanger expressed gratitude to the organizers for organizing such programme that creates awareness among the public and also to the members of Zydus Heptiza a division of Cadila healthcare Ltd for their presence.

He said government would extend full support for this campaign awareness and offer its possible assistance to the organizers.

He suggested that it was necessary to work closely with NSACS as it was related with HIV and AIDS.

HePCoN executive member Ketho Angami said the aims of the campaign were to provide knowledge to the general public on how HCV was transmitted.

He said the Integrated Bio-Behavioral Assessment (IBBA Round 1 and 2) study done by the Indian Council of Medical Research (ICMR) showed an increasing trend of HCV among injecting drug users (IDUs) from Phek and Wokha , which was found to be 5.4% to 8.7% and 16.7% to 20.8 % respectively.

He said recently the data from the Department of Microbiology, Naga Hospital Authority Kohima (NHAK) shows that the prevalence rate stands at 1.8% (General Population) from the total testing done from 2006-2012.

Angami said general prevalence rate stands at 6.86% and 70% among the IDUs in the state and Kripa Foundation, Kohima IDU projects referral to NHAK also shows the prevalence rate at 25% from the total testing done from September 2012 to June 2013.

However, in the recent years, not much has been done by the state government, Civil Organizations or the NGOs working in the field of HIV and AIDS and other health sector, whereas, the epidemic continue to spread rapidly and at a very alarmingly rate, he added.

He said the work-force for the campaign was divided into three teams, which will reach out to a total of eight strategic sites in Kohima district.

The sites for the central part of Kohima would be – Main Town (Razhü point), PR Hill, southern part of Kohima town will be-Jakhama and Viswema village and the two sites from the extreme north of the district are Tseminyu and Chunlikha blocks.

He said the target people are who use Drugs particularly IDUs, Service providers of IDU TI projects and Stakeholders.

HepCoN Convenor Abou Mere, in his speech on issues and concern, said the prevalence of hepatitis C infection among people who use drugs has been a huge concern not only in Nagaland or India but also globally.

He said in the era of highly active antiretroviral medicines for HIV alongside major investment HIV has become a chronic manageable infection, yet people who use drugs continue to die because of HCV co-infection.

Programme was chaired by Pukhato, welcome address was delivered by Kevinguto president KUN, Biswajit Guha regional therapy Manager Zydus Heptiza also address the gathering,  while vote of thanks was proposed by Tribhuwan.

Posted by Hepatitis C Research and News at 2:22 PM