Learning from the 2012–2013 class of breakthrough therapies

The expedited US regulatory pathway for 'breakthrough therapies' has already yielded its first two approvals and more than 26 designations, for 30 candidates in 22 indications.

In January, Vertex sparked a flurry of news stories when it was the first company to disclose that it had received breakthrough designation from the US Food and Drug Administration (FDA) for its cystic fibrosis therapies. Less than a year on, on 1 November, Roche and Genentech's obinutuzumab became the first drug to graduate from the breakthrough therapy programme into the real world. Weeks later, it was joined by Pharmacyclics and Johnson & Johnson's ibrutinib. The breakthrough era has arrived.

Despite the recent approvals, however, speculation remains rife about the details of the programme. What does it take for an experimental medicine to make the cut, and what benefits will the status confer? A look at the designations granted since the programme began in 2012 provides some clues.

As of 8 November, the FDA had awarded 33 designations, of which drug developers had disclosed 26. The public designees consisted of 30 drugs — small molecules, antibodies, antisense agents and enzyme replacement therapies — in 22 indications (Table 1). “It is really encouraging that we are seeing such a huge diversity of products intended to treat such a wide variety of different serious illnesses,” says Jeff Allen, Executive Director of Friends of Cancer Research and an early advocate of the breakthrough therapy pathway. “The rate of use is very exciting,” he adds. “This is more than most people would have expected to see in a year.”

To put these numbers in context, the FDA's Center for Drug Evaluation and Research (CDER) had received 106 applications for breakthrough status. The agency declined 48 of these requests, making for a 41% success rate (decisions were still pending for 25 applications). The Center for Biologics Evaluation and Research (CBER), by contrast, had received 13 applications for breakthrough status, of which it had approved none and rejected 10.

Whereas some suspect that this surge, at the CDER at least, reflects the clearance of a backlog of outstanding therapies that needed a new pathway, others are more optimistic. “The list could be three times as long and not degrade in quality,” says Timothy Coté, consultant at Coté Orphan Consulting and former director of the FDA's Office of Orphan Products.

The FDA published a much-awaited draft guidance document on expedited drug programmes in June, providing a first official glimpse into the agency's approach to the breakthrough pathway. With broad brushstrokes, the FDA laid out the need for “preliminary clinical evidence” showing that a drug offers “substantial improvement” over available therapies on at least one “clinically significant” end point in a “serious or life-threatening disease”. Industry welcomed the draft guidelines as a good start, but noted plenty of outstanding ambiguity.

“The guidance is a heroic effort to make an innately subjective process objective,” says Coté. “But it ultimately fails.” The problem is not a lack of effort or willingness from the FDA, he adds, but rather the “almost impossible” challenge of defining objective rules for a subjective process: choosing remarkable experimental medicines that are worthy of extra attention. “The criteria for selecting breakthrough therapies are still kind of squishy,” he says.

Drug developers, patient advocacy groups and other organizations seem to agree, based on comments and detailed requests for clarification they submitted to the FDA about the guidance. Pfizer's seven-page response asked, among other things, about the evidentiary standards for determining what constitutes adequate “preliminary evidence”. Novartis's nine-page response queried the difference between “substantial improvement” and “clinical superiority”. The list of questions goes on. The FDA plans to publish a final guidance document next summer that could firm up at least some of these specifics.

Until then, the 26 public designations offer a general overview of the characteristics of a breakthrough drug.

Cancer drugs — a recurring success story within the industry — score highly, accounting for 12 (46%) of the designations (Fig. 1a). “I wouldn't say I'm overly surprised by this,” says Allen. When Allen and his colleagues proposed the breakthrough pathway, three-quarters of the case studies they worked from were for cancer drugs — vemurafenib, crizotinib and vismodegib. The only non-oncologic therapeutic areas with repeat designations are infectious disease (hepatitis C virus) and respiratory disease (cystic fibrosis). The remaining drugs span a wide disease space, and about half of them are for the treatment of inherited conditions. 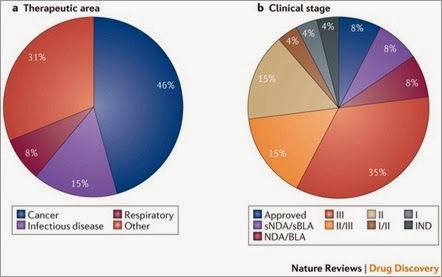 Orphan drugs feature prominently too. Sixteen (62%) of the breakthrough candidates have orphan status. Of these, seven (44% of the orphan drugs) are for rare cancer indications. At least two (8%) of the non-orphan agents are for indications that could eventually enable orphan designation, even if the status has not yet been granted. Again, says Allen, this balance is expected. Drug developers often have a good understanding of orphan disease pathophysiology and so can tailor their candidates to have extremely specific and relevant mechanisms of action. The difficulties of running trials for rare diseases are offset by the benefits of large effect sizes in homogeneous patient populations, playing perfectly into the need and promise of the breakthrough programme. “There is real opportunity here,” says Allen.

The breakdown by clinical trial stage status, however, is surprising. The FDA recommends in its draft guidance that sponsors submit designation applications “ideally ... no later than the end-of-Phase-2 meetings”. But, 15 (58%) of the breakthrough title holders are in, or have completed, Phase III trials (Fig. 1b). Roche and Genentech announced in May, for example, that obinutuzumab was a breakthrough winner, a month after they submitted the drug for regulatory review. But the agency thinks this trend will change. “As the program matures, we expect to see a shift toward requests for drugs that are earlier in their development path, a point at which the interactions between FDA and the sponsor may have the greatest impact,” wrote an FDA spokesperson.

The draft guidance also laid out the benefits of breakthrough designation. In addition to the frequent meetings and rolling review offered to fast-track designees, breakthrough sponsors get intensive guidance on efficient trial design and increased access to senior regulatory managers. “It gets you all kinds of FDA love,” says Coté.

But, he adds, “the agency was already full of love prior to the breakthrough designation”. For example, crizotinib flew through trials in under 4 years, without breakthrough designation, showing that the agency makes exceptions when need be. And one recent paper showed that a 2008 cohort of “expedited” drugs spent only 5.1 years on average in the clinic, with trials on average in only 104 patients (JAMA Intern. Med., 28 October 2013). So, how much are the breakthrough benefits likely to accelerate development timelines above and beyond their current speed? Early anecdotal evidence is encouraging — with Pharmacyclics saying it trimmed 6–9 months off the development of ibrutinib for mantle cell lymphoma — but it is still too early to tell.

For the many clinically mature breakthrough candidates, the agency has little wriggle room to speed up development timelines. And the value for earlier-stage candidates cannot be assessed until these stories play out. “Everyone feels like this is a real period where we're learning,” says Sandra Horning, Head of Oncology at Genentech.

And there will be homework, warns Urte Gayko, vice president of regulatory affairs at Pharmacyclics. The early ibrutinib filing plans and the extra FDA meetings made for “very intensive work”, she says, requiring extra staff and extra hours. “You need to be prepared.”

One lesson on the curriculum is about what kinds of efficient trial design the agency will support. Horning, Allen and others co-authored a breakthrough wish-list last summer, proposing that in some circumstances Phase Ib expansion or single-arm studies should be sufficient for accelerated or even full approval (Clin. Cancer Res. 19, 4297–4304; 2013). Once more data have rolled in, and more clinical trial programmes have been rolled out, industry will get a better sense of how far regulators are willing to bend.

Experts also wonder how the agency will handle candidates with companion diagnostics. Although companion diagnostics can increase the effect size in trials, breakthrough designation is likely to precede the clinical validation of a linked diagnostic hypothesis. Industry is calling, therefore, for extra flexibility around co-development timelines in these instances. So far, sponsors have not publicly disclosed that they are working on novel companion diagnostics for any of the breakthrough candidates. But Merck showed in October at the World Conference on Lung Cancer that patient response to MK-3475 (formerly lambrolizumab) varies with programmed cell death 1 ligand 1 (PDL1) expression levels, suggesting that this breakthrough drug could be an informative case study.

Other agents are worth watching for the wrong reasons. The FDA writes in its draft guidance that it can retract breakthrough status when trial results do not substantiate the early promise of a drug. GlaxoSmithKline's drisapersen, for Duchenne muscular dystrophy, could be a first candidate to push this limit. The antisense drug won breakthrough status in June after a 53-patient Phase II trial generated compelling efficacy data, but then in September failed an 186-patient Phase III trial.

The breakthrough label may also be at risk when granted to multiple drugs for a single indication. “If one of the two drugs gains traditional approval, the other would not retain its designation unless its sponsor provided evidence that the drug may demonstrate substantial improvement over the recently approved drug,” writes the FDA in the draft guidance. The four competing hepatitis C virus combinations, and the two second-line anaplastic lymphoma kinase (ALK)-positive non-small-cell lung cancer drugs, could test this language.

But, says Allen, the FDA needs to be able to withdraw the designation. “Breakthrough designation isn't a slam dunk,” he says.

Posted by Hepatitis C Research and News at 10:17 AM