Chimp-free labs are bad news for fight against hepatitis C 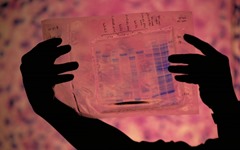 Earlier this summer, Francis Collins, the director of the National Institutes of Health, announced that the agency would significantly reduce the use of chimpanzees in scientific research. The Fish and Wildlife Service is now deliberating whether to add captive chimpanzees — a category that includes the 50 chimps the NIH set aside as a safeguard for research that could not be done any other way — to the endangered species list.

If that happens, it would mark the end of medical research using chimpanzees in the United States. Animal activists have long sought the end of chimp research, and many medical researchers also celebrated the NIH decision, saying research on the animals had become obsolete. For HIV studies, the chimps’ utility is nil; with research on malaria and other diseases, better approaches exist.

But the decisions have troubled a small number of scientists struggling to develop a vaccine for hepatitis C, a serious liver disease most common in intravenous drug users, but also found in baby boomers, veterans, health-care workers and babies born to hepatitis C–infected mothers. They say ending use of chimps will dramatically slow their research.

Hepatitis C researchers think one reason they failed to win their case with the NIH is because so many of the victims are, or have been, intravenous drug users. Some of the doctors who see patients say that the stigma associated with this disease is reminiscent of the early days of the AIDS epidemic, when research and patients suffered because of the perception that it was a "gay" disease that people had brought on themselves.

Hepatitis C, which six years ago surpassed AIDS as a cause of mortality in the United States, may have taken up the niche that AIDS once occupied. "It's stigmatized and totally lacks the advocacy and cachet of HIV," says David Thomas, director of the division of infectious disease at Johns Hopkins University. That's largely, he says, because of its link to drug use.

In announcing the NIH decision, Collins said the chimps' "likeness to humans has made them uniquely valuable for certain types of research, but also demands greater justification for their use. After extensive consideration, with the expert guidance of many, I am confident that greatly reducing their use in biomedical research is scientifically sound and the right thing to do." A NIH spokesperson declined to comment on the specific concerns of hepatitis C researchers.

Those researchers say they have few alternatives. Chimps are the only creatures, other than humans, susceptible to the hepatitis C virus. Because of this, chimps have long been considered essential for studying the disease and potential treatments — particularly a vaccine.

Francis Chisari, a virologist with the Scripps Research Institute who has been working on a vaccine, said that more than 20 years of research came "to a screeching halt" with the NIH decision. The consequences for researchers who've devoted careers to this endeavor are devastating, says Chisari. Many, he says, are considering leaving the field.

But more troubling for researchers are the consequences for people who have the disease or are at risk. Hepatitis C afflicts between 3 and 4 million Americans, most of whom don’t know they have it until its later stages. Unchecked, the disease is a serious risk factor for liver failure and liver cancer. Experts attribute a recent spike in incidence of liver cancer in the U.S. directly to this virus.

Devon Nicholson, 30, who has had the virus since 2009, called the NIH decision "sad" for patients. "I’m an animal lover; I have a lot of empathy for them," he says, "but I do think our own species should be a priority. This is a widespread, infectious disease. The treatment is hard to take, it's expensive, and from what I understand, the number of people infected is growing. This is a serious health concern for the future."

Nicholson, a former wrestler, was on the verge of realizing his life's dream — a lucrative professional wrestling contract — when a blood test, given as part of the required physical for obtaining a license to wrestle professionally, turned up positive for hepatitis C. The deal was canceled. He suspected that he’d been infected when another wrestler "bladed him" — nicked him with a concealed razor — during a match to make it bloodier and more exciting.

Self-blading is not an uncommon practice for wrestlers who want to put on a good show. "It just produces a trickle of blood, and it seals up pretty easily," says Nicholson. But you don’t nick someone else without permission, he says. His theory was proved true, he says, when he watched a videotape of one of his matches and saw his opponent, who has since tested positive for the disease, take out a razor, blade himself, and then blade Nicholson four or five times on the forehead. "It was just the same as sharing a needle," says Nicholson.

The last few years have seen an explosion of new and better drug options to treat hepatitis C, which may also be part of the reason hepatitis researchers lost their case with the NIH. Two new drugs, designed to be used in combination with existing therapies, were approved in 2011, and there are six more in the pipeline. This has led some to believe that researchers have conquered hepatitis C and a vaccine is no longer necessary.

But vaccine researchers say this isn’t true. The drug regimens may be capable of clearing the virus, but they don’t protect people from being reinfected, says Andrea Cox, a physician and researcher at Johns Hopkins University who is currently working on a trial of the one hepatitis C vaccine that was tested in chimps before the NIH decision. And the treatments themselves, at this point, are hard to take and quite expensive, about $88,000, according to Cox.

Nicholson has gone through two painful rounds of extensive drug treatment to try and get rid of the virus. The first round had to be stopped at 19 weeks, when he suffered a mild stroke. He doesn’t know yet if the second attempt, an arduous 37-week regimen that he documented via a blog and his Facebook page, has worked. He’ll be tested in mid-September to see if the virus is still in his system.

Predictions of an epidemic

Not all people with hepatitis C are drug abusers. Baby boomers are designated high risk because of potentially risky behavior experimenting with drugs in the era of sex, drugs and rock and roll, and their potential exposure to tainted blood before screenings for the virus became possible. Hepatitis C has even struck some celebrities, including Natalie Cole, Steven Tyler, Naomi Judd and Pamela Anderson. Though they have been open about their infection, their celebrity has, thus far, not changed perception of the disease.

Vets are at risk because of exposure to blood on the battlefield and transfusions before screening. Studies by the Department of Veterans Affairs have shown a hepatitis C prevalence rate of between 5 percent and 22 percent among military veterans.

And some experts, like Marian Major, a research microbiologist at the Food and Drug Administration who works on hepatitis C, predict another “sadly massive epidemic” coming in the form of young suburbanite teens casually experimenting with injectable drugs. “They think they’re safe as long as they’re with people they know,” says Major.

A vaccine could head off a lot of that. But not having chimps to test hepatitis C vaccines will “severely retard” the process, say Chisari and others. Without the chimp, researchers will have to conduct trials on humans earlier, with less assurance of efficacy. "You could end up recruiting patients for a vaccine that has no effect," says Major. And one large question is: will drug companies, faced with this inconvenience, bother with vaccine research when drug options are easier to produce?

The most likely alternative to chimps would be to create mice genetically engineered to be susceptible to the virus — a difficult and time-consuming project that has seen progress recently but by all accounts is nowhere close to being a stand-in for the chimp.

Meanwhile, patients are muddling through their options. Nicholson, who is Canadian, said he called researchers at the University of Alberta to see if a vaccine would be available after he completed his treatment. If he tests negative for the virus, he says, he wants the vaccine "to ensure I never get this disease again, no matter what." He was told it would be at least another 10 years.

Posted by Hepatitis C Research and News at 9:26 PM