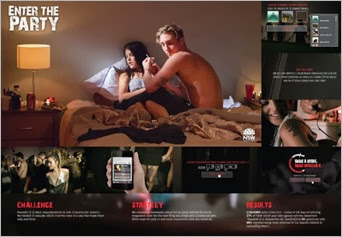 SYDNEY, AUSTRALIA: NSW Health creates an interactive online party experience to give 18-24-year-olds a hard-hitting message about the risks of contracting Hep C.

Insight
Hepatitis C is often misunderstood as only a concern for "junkies", and those who associate with dirty needles. A key audience that had a misconception around hepatitis C was 18-24-year-olds. In fact only 5% saw themselves at any risk. (Source: TNS for NSW Government)

This demonstrated a problem, how can you hope to make a message stick with a famously hard-to-reach group when the message is about something they feel is someone else's problem? A big budget awareness campaign targeting all of the 18-24-year-olds in NSW wasn't an option; the budget was just $200k. Mediacom had to be clever with the money by closely relating the message to occasions where Hep C is contracted. This was the key task.

The agency needed to understand the times and places that young people were most at risk of contracting Hepatitis C. Research showed that an important setting for risk was parties, where people who were not regular drug users got caught up in the heat of the moment and ended up sharing a needle when recreational drug use escalated, as the party evolved.
It was clear that as a party developed they started making decisions based on different parameters.

This led us to a clear insight: Decisions that increase the risk of hepatitis C are made in the heat-of-the-moment, not when in a cold, considered state.

Strategy
Enter The Party. Delivering the Hepatitis C message in the most impactful way meant doing it when they were in a heat-of-the-moment mindset. You can't buy media at parties so the question was, how would the agency get people into a drug-sampling-party-immersed mindset in a government media campaign? It needed to put them in harm's way without being in harm's way.

Mediacom achieved the heat-of-the-moment mindset in a virtual way by basing the whole campaign online. Its audience being internet hungry 18-24-year-olds added further logic to this decision.

The campaign had two parts:

2. Online media and messaging inviting and tempting the audience to the party.
With a spend of just $200k the agency single-mindedly approached just one media partner, Mi9, to deliver the most added value. This media inventory and advertorials all pushed to the main part of the campaign; an interactive party experience that we created at entertheparty.com.au.

Execution
1. An Immersive Virtual Party: The agency created a realistic (Facebook integration so you were there with your friends), interactive (user-defined journey through the party) and appealing (styling, music and locations closely matched to real life parties), to ensure it was a party the audience wanted to go to. The results will show you that it was.

The party-goer had to make decisions that started tame- e.g. "do you want to hang with your friends in the kitchen or backyard"- and then escalated to the more risky and Hep C relevant- e.g. "do you want to get a home tattoo", cumulating with a scene in a bedroom with the question "would you share a needle?".

In this heat-of-the-moment, late-stage party mindset it delivered the key message about the situations in which the viewer would personally be at risk of contracting Hepatitis C. From here the party-goer had the option to re-enter the party, explore different routes, or share the party on Facebook.

2. How to get people to the party: Earned media was key but the Mi9 partnership was used to access relevant environments such as Zoo, Celebrity Fix, Music Fix, Cleo, Cosmo, and behavioural targeting to seek out young partygoers. This consisted of banner ads that were first person, real video shots of the party, as if you were looking right through the window of the house. They invited you to "enter the party".

Results
Brad Kemp, Senior Marketing Officer, NSW Health, said: "We loved the agencies unique thinking in answering this brief. We are currently investigating ways to roll out this idea to a larger audience.

\We look forward to the agency continuing to challenge our thinking, as work such as this really does change the way we think about communications."

The campaign was relevant to the target audience; 27% of NSW 18-24-year-olds agreed with the statement "Hepatitis C is relevant to me" after the activity compared to 5% who viewed themselves as being at risk before the activity. (Source: TNS for NSW Government Campaign Evaluation; January 2013)

It reached a wide audience despite a tiny spend; 20% of NSW 18-24-year-olds participating in the evaluation research recalled seeing the communication. (Source: TNS Campaign Evaluation; January 2013)

It made specific messages stick; 69% of young people exposed to the party reported being more informed of the specific factors to contracting Hep C. (Source: Millward Brown; October 2012)

It created a relevant and memorable environment; 65% said they would refer to this campaign if a friend ever suggested the idea of injecting drugs. (Source: TNS Campaign Evaluation; January 2013).

Posted by Hepatitis C Research and News at 3:46 PM