The Rise of Sofosbuvir

Many clinicians are ecstatic about the recent approval of sofosbuvir (Sovaldi, Gilead Sciences) for patients with hepatitis C virus (HCV) infection. At The Liver Meeting 2013, several presentations provided new insight into just how sofosbuvir will perform in clinical practice. 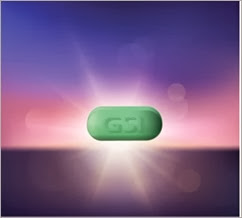 “I think sofosbuvir is the cat’s meow,” said Sammy Saab, MD, MPH, professor of medicine and surgery and head of outcomes research in hepatology at the David Geffen School of Medicine, University of California, Los Angeles.

“It’s a drug that has no resistance or incremental adverse effects. It is very well tolerated, very safe, very efficacious and there are no significant drug interactions with it. I think it is going to revolutionize the way we treat hepatitis in this country and around the world.”

According to studies presented at The Liver Meeting, many factors traditionally thought to portend poor outcomes in HCV patients may not have an effect with sofosbuvir. One study was a retrospective analysis of 982 patients with HCV infection (genotypes 1-6) in four Phase III trials: FISSION, POSITRON, FUSION and NEUTRINO. Patients were treated with sofosbuvir plus ribavirin, with or without pegylated interferon (IFN). Sustained virologic response (SVR) rates were analyzed according to gender, age (<65 vs. ≥65 years), interleukin-28 B (IL28B) genotype, body mass index (<30 vs. ≥30 kg/m2), race (black vs. non-black), viral load (HCV RNA <107 vs. ≥107 copies/mL), opiate replacement status and cirrhosis. Of these factors, only male gender and the presence of cirrhosis were consistently predictive of worse outcomes; the difference between cirrhotics and noncirrhotics existed but was not large. In the NEUTRINO trial, for example, 80% of cirrhotics versus 92% of noncirrhotics achieved SVR at week 12. Also, IL28B genotype status was only predictive of SVR in the NEUTRINO trial.

Sofosbuvir in combination with ribavirin also works well and causes less toxicity than IFN-based regimens in HCV patients who are coinfected with HIV. In the PHOTON-1 trial, 182 treatment-naive patients with HCV genotype 1, 2 or 3 and stable HIV disease, some of whom had cirrhosis, were evaluated. SVR rates at week 12 were 81% in HCV genotype 2 patients and 67% in HCV genotype 3 patients. Among the 19 patients not acheiving SVR at week 12, relapse was confirmed in 12 patients and data were missing for six patients. HCV genotype 1 patients received 24 weeks of treatment and had an SVR rate of 76%. Sofosbuvir was coadministered effectively with multiple HIV antiretroviral regimens, including inhibitors of HIV-1 protease, reverse transcriptase and integrase; it had no adverse effect on HIV status or antiretroviral therapy.

“The IFN-free regimen of sofosbuvir plus ribavirin resulted in high SVR 12 rates in HCV treatment-naive, HIV-infected patients with HCV genotype 1, 2 or 3 coinfection,” said Mark Sulkowski, MD, medical director of the Viral Hepatitis Center in the Divisions of Infectious Diseases and Gastroenterology & Hepatology, and professor of medicine at the Johns Hopkins School of Medicine, in Baltimore, who presented the study. “SVR 12 rates were similar to those observed in patients with HCV mono-infection.”

“The findings in this interim analysis suggest that the addition of ribavirin to simeprevir plus sofosbuvir may not be needed to achieve high rates of SVR in this patient population,” said Ira Jacobson, MD, chief of the Division of Gastroenterology and Hepatology at Weill Cornell Medical College, New York City, who presented the data. “Anemia and bilirubin increases were predominantly limited to the ribavirin-containing treatment arms.”

Results from the LONESTAR-2 trial echoed results of other trials showing the high efficacy of sofosbuvir in prior null responders and patients with cirrhosis. This trial tested 12 weeks of treatment with sofosbuvir plus pegylated IFN and ribavirin in treatment-experienced patients with HCV genotype 2 or 3 infection. HIV and HBV coinfected patients were excluded from the trial, but 50% of the study population had compensated cirrhosis. In patients with HCV genotype 2 (n=23), 93% of cirrhotics and 100% of noncirrhotics achieved SVR at week 12. In HCV genotype 3 patients, the presence of cirrhosis did not affect outcomes, and 83% of patients achieved SVR at week 12.

“Sofosbuvir plus pegylated IFN/ribavirin for 12 weeks demonstrated high efficacy in treatment-experienced genotype 2/3 patients who have historically low response rates and limited treatment options,” said Eric Lawitz, MD, vice president of scientific and research development at The Texas Liver Institute and clinical professor of medicine at the San Antonio University of Texas Health Science Center, who presented the study. “SVR rates were similar in patients with and without cirrhosis.”

Different Treatment Duration for Patients With HCV Genotypes 2 and 3

Although many of the traditional factors that predict treatment response in HCV patients do not seem to apply to sofosbuvir, there does seem to be a difference in response among HCV genotypes. In general, clinicians are accustomed to treating patients with HCV genotype 2 or 3 similarly, but these two groups respond differently to sofosbuvir.

More evidence that longer therapy is better for HCV genotype 3 patients came from data presented at a meeting of the FDA Sofosbuvir Review team on Oct. 25.

The FDA analysis combined data from the FISSION, POSITRON, FUSION and VALENCE trials. In both treatment-naive and treatment-experienced patients with HCV genotype 3, SVR rates dramatically rose and relapse rates fell when treatment was increased from 12 weeks to 24 weeks (Table). 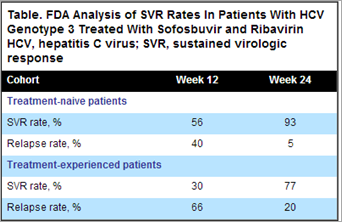 Posted by Hepatitis C Research and News at 8:30 PM