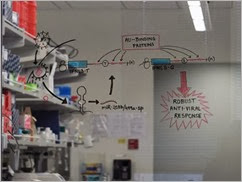 This is a schematic on the window board of Dr. Ram Savan's lab at UW Medicine South Lake Union in Seattle. The schematic outlines how a genetic variant produces a robust antiviral response to the hepatitis C virus. Credit: Ram Savan/University of Washington

The hepatitis C virus (HCV) has a previously unrecognized tactic to outwit antiviral responses and sustain a long-term infection. It also turns out that some people are genetically equipped with a strong countermeasure to the virus' attempt to weaken the attack on it.

The details of these findings suggest potential targets for treating HCV, according to a research team led by Dr. Ram Savan, assistant professor of immunology at the University of Washington. The study was published in Nature Immunology.

HCV infects more than 150 million of the world's people. The virus is notorious for evading the body's immune system and establishing an infection that can continue for decades, despite treatment. A lasting infection can damage the liver, and in some cases produce liver cancer. HCV infection is a major cause of liver failure requiring an organ transplant.

The virus, hiding in other tissues, can return in the transplanted liver. HCV and the human immune system are engaged in a seemingly never-ending duel, each trying to overcome the others latest move. Several HCV mechanisms for defying the body's immune system have already been uncovered.

He added, however, that resistant strains of HCV are emerging in antiviral treated patients. Also troubling, he said, is that certain patients can undergo almost a year of treatment weeks – and still be infected. They've endured the unpleasant, flu-like side effects of the regimen with little benefit.

After observing that patients of Asian descent reacted better to HCV treatment than did those of African descent, other research teams searched entire human genomes to identify gene clusters associated with response to therapy.

These tiny genetic variations are located near an area that encodes for interferon-lamda3 (IFNL3), also called interleukin-28B. Viruses can trigger blood cells and other cells to produce this potent substance, which is released to protect against virus invasion.

The mechanism aligning this genetic finding with clearance of HCV had been elusive, Savan's group noted in their paper. His team discovered how the single-letter variation in the IFNL3 gene was responsible for the differences between those who could and those who could not effectively clear HCV.

Their data showed that HCV could induce liver cells to target the activities of the IFNL3 gene with two microRNAs. MicroRNAs are silencers: They stop the messengers who transmit information to produce a protein from a gene, in this case the production of the antiviral interferon lambda-3.

These two particular microRNAs are generally turned off in liver cells, until HCV coerces them to act on its behalf. Normally, these so called myomiRs are associated with myosin-encoding genes in skeletal and heart muscle.

"This is a previously unknown strategy by which HCV evades the immune system and suggests that these microRNAs could be therapeutic targets for restoring the host antiviral response," the researchers wrote in their paper. Adding support to this suggestion is the researchers' observation that the bad-acting microRNAs in question could not land on and repress interferon lambda-3, if the host carried the favorable "G" variant.

In those cases, the host is able to escape adverse regulation by HCV, the researchers observed. Savan pointed out that this particular escape variant has been found only in humans, and not in other primates. He said it is not yet known if the G variant arose in humans as a response to selective pressure by infection with HCV.

Savan came to the University of Washington in late 2011 from the National Institutes of Health. The first author on the paper, Adelle McFarland, was a research scientist in Savan's lab and is now a graduate student in the Molecular and Cellular Biology Program at the UW.

Other researchers on the project, reported in the article "The favorable IFNL3 genotype escapes mRNA decay mediated by AU-rich elements and hepatitis C virus-induced microRNAS," were Stacy M. Horner, Abigail Jarret, Rochelle C. Joslyn, all at the UW Department of Immunology at the time of the study; Eckart Bindewald and Mary Carrington of the Frederick National Laboratory for Cancer Research, Bruce A. Shapiro of the National Cancer Institute, and Don A. Delker and Curt H. Hagedorn, both of the University of Utah. Michael Gale, Jr., a collaborator in this study, is from the UW department of Immunology.

A Nature Immunology News & Views commentary, "Outflanking HCV." by Zhigang Tian of the University Of Life Sciences Of China in Hefei, gives a perspective on the research findings.

Posted by Hepatitis C Research and News at 4:18 PM