The clinical importance of hepatitis C genotyping in the United States

Hepatitis C virus (HCV) infection is the most common chronic blood-borne infection in the United States: nearly four million persons are chronically infected.1 HCV infection is cleared in fewer than 20% of infected people, with the majority developing chronic HCV infection leading to increased risk of liver cirrhosis, hepatocellular carcinoma (HCC), liver failure, and related morbidities.1 HCV-related morbidity and mortality is further driven by the estimates that, due to the asymptomatic nature of infection and slow disease progression, 45% to 85% of infected patients are unaware of their HCV infection until they present with liver disease.1 Currently, there is no effective vaccine for HCV; clinical efforts are focused on prevention of infection, identification of infected individuals, and therapeutic treatment of infected individuals. Decisions to treat HCV-positive individuals are based upon the severity of the patient’s clinical features. The HCV genotype is used to aid in treatment decisions and determine the type of treatment, dosage, and duration of therapy, and to estimate the likelihood of response.2-3

Upon infection, some people note fatigue, loss of appetite, muscle aches, or fever. In most individuals, the immune system is unable to clear the infection and HCV chronic infection progresses over decades, which may lead to liver inflammation and elevated liver enzyme levels. An estimated 20% of individuals infected with HCV will progress to cirrhosis 20 years after infection.1 Up to 5% of persons with chronic HCV infection per year will progress to advanced cirrhosis and die from HCV-associated liver disease.1

HCV infection is the leading indication for liver transplant and accounts for 50% of hepatocellular carcinoma cases. Due to the slow progression of HCV disease, 73.4% of HCV related deaths occur in persons aged 45-64 years,1 one to four decades after initial infection.

Screening and diagnosis of HCV infection

Traditionally, HCV testing has been recommended for individuals at high risk for HCV transmission. High risk for HCV transmission includes individuals who have participated in injection drug use, undergone chronic hemodialysis, or received blood transfusions or organ transplants before 1992 or clotting factor concentrates manufactured before 1987.3This risk-based testing strategy has had limited success in accurately diagnosing HCV-positive individuals, with 45% of persons with HCV reporting no known exposure risk.1

In an effort to diagnose more HCV-positive individuals prior to development of liver disease, the U.S. Centers for Disease Control and Prevention (CDC) recently released new age-based HCV screening guidelines. The CDC study determined that the prevalence of anti-HCV antibodies, which indicate exposure, was highest among persons born during 1945-1965 (at 3.25%), roughly five times higher than adults born in other birth cohorts. Another CDC HCV surveillance study found that persons born between 1945 and 1965 accounted for 58.5% of those who were HCV antibody-positive and 67.2% of those who were HCV RNA-positive.4 The recent CDC birth cohort screening recommendation states that adults born between 1945 and 1965 should receive one-time testing for HCV, regardless of risk. In an independent review, the U.S. Preventive Services Task Force (USPSTF) also supports the recommendation for birth cohort screening to drive improved health outcomes. The benefits of amended HCV diagnosis guidelines are to identify more infections prior to the onset of liver disease and thus better enable accurate diagnosis of active chronic HCV infection.

The overall goal of the updated CDC recommendation is to improve awareness of HCV infection and drive improved healthcare outcomes. The adoption of birth cohort screening at the same compliance rate as colorectal screening recommendations could identify 400,000 new HCV-infected individuals in the next three years. The use of HCV RNA testing may also improve the accuracy of HCV diagnosis and lead to follow-up medical evaluation.

Once diagnosis is confirmed with a nucleic acid HCV RNA test, treatment decisions are based on multiple factors, including the severity of liver disease, the presence of other health issues, patient readiness for treatment, and potential for treatment side effects. The goal of antiviral therapy is to achieve Sustained Virological Response (SVR), defined as undetected HCV virus 24 weeks after completion of therapy. The treatment regimen varies by HCV genotype (Table 1). 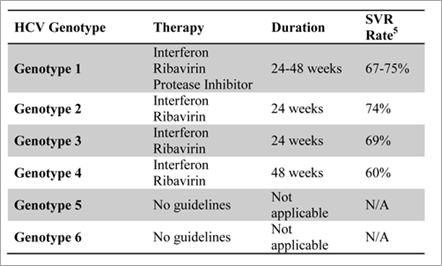 Duration of treatment for genotype 1 and 4 is based on specific stopping rules related to early virologic response to therapy determined by RNA viral load drop during the first 4 to 24 weeks of therapy. Genotype 1 patients receive triple therapy with pegylated interferon (PEG-IFN), ribavirin (RBV), and one of the FDA-approved protease inhibitors. No formal therapy guidelines exist for genotype 5 and 6 patients, but the typical treatment regimen is PEG-IFN and RBV. Genotype 2 and 3 patients are typically given, and respond well to, PEG-IFN/RBV therapy, with SVR rates of approximately 70%.

The evolution of HCV treatment

HCV therapy in the early 1990s focused on stimulating the patient’s innate antiviral immune response with interferon (IFN) therapy. By the 2000s, therapy that included the nonspecific antiviral drug ribavirin in combination with IFN improved SVR rates in genotypes 1-3 two- to threefold.6

The first antivirals that specifically targeted HCV, direct acting antivirals (DAAs), were approved in 2011. Two hepatitis C DAAs approved in 2011 prevent viral replication by inhibiting HCV’s NS3/NS4 proteases required for hepatitis C virus protein processing. The approval of protease inhibitor DAAs for HCV genotype 1, used together with PEG-IFN and RBV, improved SVR rates from 30% to approximately 60% to 70% SVR.5 Some persons do not reach SVR due to emergence of HCV drug resistance mutations to the protease inhibitors. In particular, HCV genotype 1, subtype A is more prone to developing resistance mutations that can reduce SVR.7 Other potential targets for HCV DAAs include HCV’s RNA-dependent RNA polymerase (NS5B) and the viral cofactor protein NS5A, which is required for viral replication.

At present, there are more than 25 drug candidates in phase II or phase III clinical trials targeting HCV infection. Three of the leading drug candidates in phase III trials (Sofosbuvir, Faldaprevir, and Simeprevir), used in combination therapy with PEG-IFN plus RBV (P/R), show 80% to 90% SVR rates in individuals with HCV genotypes 1a/1b (Table 2). Sofosbuvir is being evaluated on multiple genotypes, which may lead to DAA treatment options for non-genotype 1 individuals. Triple DAA therapy with ABT-450/267/333 plus ritonavir is being evaluated without PEG-IFN to reduce adverse treatment side effects while still delivering ~90% SVR.8

Numerous DAA drug candidates are in late-stage trials, and some are currently under priority marketing review, which may lead to FDA approval of these drugs by 2014. Future combination DAA therapy trials are focused on shorter treatment course, activity to all HCV genotypes, and elimination of PEG-IFN and ribavirin from the therapy. Ultimately, if these goals are achieved, the results would be reduced side effects from therapy, reduced drug resistance, and simplified therapy regimens to improve patient compliance through the course of treatment. The rapid advances in DAA development and the large number of clinical trials will likely deliver 8-to-12 week therapy for all genotypes, with SVR rates exceeding 90%, in the coming years.

Hepatitis C virus genotyping is currently used as an aid in determining dose and duration and estimating therapeutic response. Based on the current standard of care, it is critical for patients to receive an accurate genotype, particularly in the case of patients with HCV genotype 1, as they are eligible for combination therapy with FDA-approved protease inhibitors. While the standard of care does not require subtyping of genotype 1, there is significant evidence indicating HCV genotype 1a is more likely to develop drug resistance mutations than genotype 1b.7 As a result, accurate genotype 1a and 1b subtyping may contribute to clinical decisions, such as beginning therapy immediately or waiting for more effective DAA combination therapy in the near future. It is possible that some of the new DAAs will be approved with genotype-specific indications with variation in dosage or duration for treating specific genotypes.

It is estimated that 3% of the world’s population is chronically infected with HCV.6 In the United States, HCV is an increasing cause of morbidity and mortality and the leading indication for liver transplant. In the last few years the CDC has expanded HCV screening efforts and recommended a new HCV diagnostic algorithm to drive HCV awareness just as new HCV therapies are nearing FDA approval. Expanded screening efforts with early and accurate diagnosis and genotyping are now more important than ever as delivering an effective and accessible cure for HCV becomes a reality.

Posted by Hepatitis C Research and News at 3:24 PM