Contact: Courtney Lock
easlpressoffice@cohnwolfe.com
44-207-331-5317
European Association for the Study of the Liver 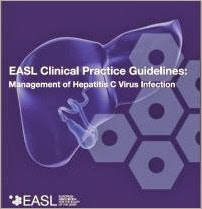 The European Association for the Study of the Liver (EASL) today publishes their revised Clinical Practice Guidelines (CPGs) on the management of hepatitis C virus infection (HCV) (1). The EASL guidelines, which supersede the previous version published in 2011, are designed to help physicians and other healthcare providers optimise their management of patients with acute and chronic HCV.

It is estimated that approximately 160 million individuals, i.e. 2.35% of the world's population, are chronically infected with HCV. In the European Union alone, between 7.3 and 8.8 million people are infected with HCV, double the previous estimate made in 1997. The prevalence varies across the region with higher rates seen in the south and the east, making HCV a critical area of attention for hepatologists as one fifth of HCV-infected patients are at risk of developing cirrhosis or liver cancer (2).

"Since EASL published the last HCV CPG in 2011, two protease inhibitors have been approved for use in patients infected with HCV genotype 1. These first-generation direct-acting antivirals are the first of many direct acting antiviral drugs which will revolutionise treatment for HCV patients, including those who failed to respond to previous therapies. The new guidelines provide essential information on the recommended use of these newly licensed drugs to help prescribers deliver optimal care for their HCV patients."

Based on a systematic review of existing literature, the CPGs provide best practice recommendations on a number of key areas:

The guidelines also contain significant discussion about people who inject drugs (PWID*) providing an overview of the published literature relating to the treatment of these patients, and covering issues such as:

Professor Mutimer added: "With HCV spread among PWID now accounting for the vast majority of incident cases in developed countries, and with modelling studies suggesting that treatment for PWID could reduce transmission, it is critical that physicians review and adopt these guidelines when managing this important group of patients."

Commenting on the CPGs, EASL Secretary General Professor Markus Peck-Radosavljevic said "EASL is dedicated to promoting hepatology research and education to improve the worldwide treatment of liver disease. As treatment for hepatitis C continues to progress rapidly with the development and approval of new therapies, it's vital to ensure that our series of Clinical Practice Guidelines reflect best practice to drive better clinical outcomes.

"As there have been several key clinical and scientific advances over the past two years, these guidelines build upon the recommendations reported by the EASL HCV panel of experts in 2011. EASL encourage clinicians to refer to these new HCV guidelines for the most up-to-date, evidence based methods to offer patients first class treatment."

The guidelines will also be published in the Journal of Hepatology (Vol. 60 Issue. 2 February, 2014) and presented during a session of the International Liver CongressTM 2014 in London (April 9 – 13).

EASL's main focus on education and research is delivered through numerous events and initiatives, including:

Posted by Hepatitis C Research and News at 8:41 AM