A Texas couple shares the story of their child with hepatitis C. Learn about precautions they take as well as treatment that holds the promise of a cure. 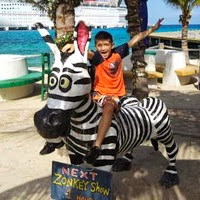 When Frances and Terry Perryman, of Spring, Texas, adopted their son Austin, they knew his mother had tested positive for hepatitis C. However, "because only a small percent of children get hepatitis C from their mother, we thought the odds were in our favor," says Frances.

According to the American Liver Foundation, mothers infected with hepatitis C have just a 5 percent chance of infecting their child. What’s more, up to 40 percent of children born with hepatitis C clear the virus on their own before they turn 2.

The couple had Austin tested as a precaution at age 2 and were surprised that their child had the hepatitis C infection. "Although we knew that the possibility existed, our beautiful baby was a picture of health," Terry says.

Austin didn’t have any signs of hepatitis C, which is also typical. Most children living with hepatitis C have no symptoms. "That's what is so scary about this disease," Frances says. "You don't see symptoms until there's significant damage to the liver."

The Perrymans were devastated by the diagnosis. "It's hard to look at a child that you love so much and know that there's something inside him that's making him a little sicker every day," Terry says.

Children with hepatitis C should take special precautions. If an injury occurs, parents need to make sure that their child’s blood and other bodily fluids don’t come into contact with anyone else. This contact could spread disease, says Austin’s doctor, Daniel Leung, MD, an assistant professor of pediatrics at Baylor College of Medicine and medical director of the Viral Hepatitis Clinic at Texas Children’s Hospital in Houston.

This means that caregivers — even parents — who are helping an injured child who has hepatitis C should wear gloves to prevent exposure.

In addition, Dr. Leung says that a teen or child with hepatitis C should not share toothbrushes, needles, or razors, which can spread hepatitis C. There are no concerns related to living in the same household such as kissing, hugging, or sharing cups or utensils, however.

After learning that their child had hepatitis C, the Perrymans told Austin, now 12, about his diagnosis. "He's fully aware of the precautions that he has to take if he bleeds for any reason," Frances says. "We make sure that we have gloves on hand."

Children living with hepatitis C can participate in any activities they choose. The couple told Austin's baseball coaches about his condition so they can wear protective gloves in case he gets injured on the field.

Success of Treatment for Hepatitis C in Children

Treatment options depend upon the genotype of the child with hepatitis C. In Austin's case, only one type of treatment was available. The first round of Austin's treatment, ribavirin (in liquid form) twice a day and a weekly injection of peginterferon alfa-2b, failed. However, after consulting with his doctor at Texas Children's Hospital, Austin and his parents agreed to try a second round of treatment, using the same drug combination.

Austin has the same side effects adults often experience: He’s fatigued and feverish for 24 to 48 hours after getting the injection, Frances says.

"We've also seen a change in his personality and ability to focus," says Terry, who notes that although Austin is in many advanced school classes, he's had some struggles because of the drugs’ side effects. He's also changed from a chatterbox to a quieter child at school. Three to four times a week, he goes to the school nurse's office to nap.

Austin's blood counts also have to be monitored. His dosage of medication had to be reduced twice because of low white and red blood counts.

"We considered the side effects before starting the second round of treatment," Frances says. "Ultimately, we decided to move forward with the treatment, hoping that the side effects would be more tolerable now than when he gets older."

The choice seems to be working. Austin’s most recent tests found that the hepatitis C virus is undetectable in his blood. He'll remain on treatment for another six months and will be considered cured six months after treatment stops if the virus is still undetectable. "Based on his genotype, we are very optimistic," Terry says.

Posted by Hepatitis C Research and News at 10:06 PM