A preliminary study finds certain biological markers in the blood of teens with depression that are absent in healthy counterparts. It could lead to the first diagnostic testing for depression. 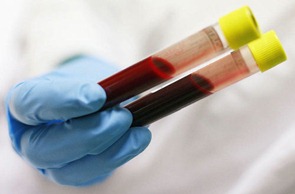 A new study takes a significant step in that direction by demonstrating that a simple blood test can distinguish between people who are depressed and those who are not. (Hannah Johnston / Getty Images / April 17, 2012)

Even among psychiatric disorders, depression is a difficult disease to diagnose. Its causes remain a mystery, its symptoms can't be defined with precision, and treatments are spotty at best.

But that may soon change. Scientists are looking for ways to identify patients with depression as reliably as they diagnose cardiovascular disease, diabetes and cancer. A new study takes a significant, though preliminary, step in that direction by demonstrating that a simple blood test can distinguish between people who are depressed and those who are not.

The test examined a panel of 28 biological markers that circulate in the bloodstream and found that 11 of them could predict the presence of depression at accuracy levels that ranged from medium to large. And if that were not remarkable enough, researchers pulled off this feat in a group of teenagers, whose angst often defies all efforts at classification.

The study, published online Tuesday in the journal Translational Psychiatry, offers hope that doctors can do a better job of helping adolescents whose mood difficulties go beyond those of typical teens, and whose lifelong prospects could be greatly improved by early treatment. What's more, by using objective data to diagnose mental pain, researchers hope to remove the stigma that often prevents patients from reaching out to doctors.

"Once you have a measurable index of an illness, it's very difficult to say, 'Just pull yourself together,' or 'Get over it,' " said study leader Eva Redei, a professor of psychiatry and behavioral sciences at Northwestern University's Feinberg School of Medicine in Chicago. A federal report released last year estimated that as many as two-thirds of the nation's 2 million depressed teens are too embarrassed or ashamed to get help.

The study drew responses of praise and caution from other researchers seeking better ways to diagnose and treat major depressive disorder.

"This is definitely an encouraging study," said Dr. Andrew Leuchter, a UCLA psychiatrist who is researching ways to improve treatment with genetic testing and was not involved in the new work. Finding a way to intervene with teens would be particularly valuable since a bout of depression early in life makes repeat episodes more likely, and therefore more urgent to treat, he said.

The current study focused on teens and "early onset" depression, but the researchers said they hoped to include adults in future testing.

Redei's study takes a middle-of-the-road approach to the search for a "biomarker" of depression. Her team did not look for genetic variations that might predispose an individual to depression, nor did it use advanced MRI scans to home in on peculiarities in the way the depressed brain works. Instead, the team focused on the messenger molecules that carry out genetic instructions for producing or inhibiting proteins.

The researchers started out with rats, breeding some for their vulnerability to depression and raising others to serve as healthy control subjects. In an effort to tease out the long-term molecular consequences of childhood stress, some rats from both groups spent hours restrained and alone in their cages. After several generations, the researchers identified 11 distinct molecules that were often found in the blood and brains of depressed rats but were largely absent in the healthy animals.

The tests also turned up 15 molecules that distinguished rats who suffered from a combination of depression and severe anxiety from those whose depression resulted in listless, helpless behavior.

Then the researchers tested the predictive value of the same biomarkers in a group of 14 depressed teens between the ages of 15 and 19 and a group of 14 healthy control subjects. Sure enough, the teens with depression had significantly higher concentrations of the 11 targeted molecules in their blood. In addition, there were 18 biomarkers that could distinguish between adolescents who suffered from depression alone and those who had depression and anxiety.

Dr. Sidney Kennedy, a psychiatrist at the University of Toronto who is leading a project called the Canadian Depression Biomarker Network, said Redei's study was the first to use messenger molecules as biological signposts for depression. As other efforts to find biomarkers mature — including costly brain scans and genetic analyses — those could refine and strengthen a blood test to screen large populations, he said.

"There is merit in this work," Kennedy added.

In the meantime, he praised the study for making a first attempt at one of the field's most ambitious goals: to explain, describe and distinguish among depression's many and varied forms.

Redei said her team hoped to perfect the blood panel by testing it in larger and more varied groups of subjects — including those with other psychiatric illnesses, including bipolar disorder, that are sometimes mistakenly diagnosed as major depression.

But before any such blood test could go into broad use, she cautioned, scientists would have to show that it could reliably detect the presence of illness without generating too many false positives.

"The probability that we will be able to put together a panel that's usable is rather high," she said. "This data at the moment truly proves that it can be done."

Posted by Hepatitis C Research and News at 9:06 PM