Liver fibrosis is part of the structural and functional alterations in most chronic liver diseases. It is one of the main prognostic factors as the amount of fibrosis is correlated with the risk of developing cirrhosis and liver-related complications in viral and non-viral chronic liver diseases [1] and [2]. Liver biopsy has traditionally been considered the reference method for evaluation of tissue damage such as hepatic fibrosis in patients with chronic liver disease. Pathologists have proposed robust scoring system for staging liver fibrosis such as the semi-quantitative METAVIR score [3] and [4]. In addition computer-aided morphometric measurement of collagen proportional area, a partly automated technique, provides an accurate and linear evaluation of the amount of fibrosis [5]. Liver biopsy gives a snapshot and not an insight into the dynamic changes during the process of fibrogenesis (progression, static or regression). However, immunohistochemical evaluation of cellular markers such as smooth muscle actin expression for hepatic stellate cell activation, cytokeratin 7 for labeling ductular proliferation or CD34 for visualization of sinusoidal endothelial capillarization or the use of two-photon and second harmonic generation fluorescence microscopy techniques for spatial assessment of fibrillar collagen, can provide additional “functional” information [6] and [7]. All these approaches are valid provided that the biopsy is of sufficient size to represent the whole liver [4] and [8]. Indeed, liver biopsy provides only a very small part of the whole organ and there is a risk that this part might not be representative for the amount of hepatic fibrosis in the whole liver due to heterogeneity in its distribution [9]. Extensive literature has shown that increasing the length of liver biopsy decreases the risk of sampling error. Except for cirrhosis, for which micro-fragments may be sufficient, a 25 mm long biopsy is considered an optimal specimen for accurate evaluation, though 15 mm is considered sufficient in most studies [10]. Not only the length but also the caliber of the biopsy needle is important in order to obtain a piece of liver of adequate size for histological evaluation, with a 16 gauge needle being considered as the most appropriate [11] to use for percutaneous liver biopsy. Interobserver variation is another potential limitation of liver biopsy which is related to the discordance between pathologists in biopsy interpretation, although it seems to be less pronounced when biopsy assessment is done by specialized liver pathologists [12]. Beside technical problems, liver biopsy remains a costly and invasive procedure that requires physicians and pathologists to be sufficiently trained in order to obtain adequate and representative results – this again limits the use of liver biopsy for mass screening. Last but not least, liver biopsy is an invasive procedure, carrying a risk of rare but potentially life-threatening complications [13] and [14]. These limitations have led to the development of non-invasive methods for assessment of liver fibrosis. Although some of these methods are now commonly used in patients for first line assessment, biopsy remains within the armamentarium of hepatologists when assessing the etiology of complex diseases or when there are discordances between clinical symptoms and the extent of fibrosis assessed by non-invasive approaches.

The performance of a non-invasive diagnostic method is evaluated by calculation of the area under the receiver operator characteristic curve (AUROC), taking liver biopsy as the reference standard. However, biopsy analysis is an imperfect reference standard: taking into account a range of accuracies of the biopsy, even in the best possible scenario, an AUROC >0.90 cannot be achieved for a perfect marker of liver disease [15]. The AUROC can vary based on the prevalence of each stage of fibrosis, described as spectrum bias [16]. Spectrum bias has important implications for the study of non-invasive methods, particularly in comparison of methods across different study populations. If extreme stages of fibrosis (F0 and F4) are over-represented in a population, the sensitivity and specificity of a diagnostic method will be higher than in a population of patients that has predominantly middle stages of fibrosis (F1 and F2). Several ways of preventing the “spectrum bias” have been proposed including the adjustment of AUROC using the DANA method (standardization according to the prevalence of fibrosis stages that define advanced (F2–F4) and non-advanced (F0–F1) fibrosis) [17] and [18] or the Obuchowski measure (designed for ordinal gold standards) [19]. What really matters in clinical practice is the number of patients correctly classified by non-invasive methods for a defined endpoint according to the reference standard (i.e. true positive and true negative).

These Clinical Practice Guidelines (CPGs) have been developed by a panel of experts chosen by the EASL and ALEH Governing Boards. The recommendations were peer-reviewed by external expert reviewers and approved by EASL and ALEH Governing Boards. The CPGs were established using data collected from PubMed and Cochrane database searches. The CPGs have been based, as far as possible, on evidence from existing publications, and, if evidence was unavailable, the experts’ provide personal experiences and opinion. When possible, the level of evidence and recommendation are cited. The evidence and recommendations in these guidelines have been graded according to the Grading of Recommendations Assessment, Development and Evaluation (GRADE) system. The strength of recommendations thus reflects the quality of underlying evidence. The principles of the GRADE system have been enunciated [20]. The quality of the evidence in the CPG has been classified into one of three levels: high (A), moderate (B) or low (C). The GRADE system offers two grades of recommendation: strong (1) or weak (2) (Table 1). The CPGs thus consider the quality of evidence: the higher the quality of evidence, the more likely a strong recommendation is warranted; the greater the variability in values and preferences, or the greater the uncertainty, the more likely a weaker recommendation is warranted.

Table 1. Evidence grading used for the EASL-ALEH guidelines (adapted from the GRADE system).

The non-invasive tests CPG Panel has considered the following questions:

What are the currently available non-invasive tests?

What are the endpoints for staging liver fibrosis?

How do serum biomarkers perform for staging liver fibrosis?

How does transient elastography (TE) perform for staging liver fibrosis?

How do novel elastography methods perform compared to TE for staging liver fibrosis?

How does TE perform compared to serum biomarkers for staging liver fibrosis?

What is the added value of combining TE and serum biomarkers?

What are the indications for non-invasive tests for staging liver disease in viral hepatitis?

How should non-invasive tests be used when deciding for treatment in viral hepatitis?

Is there a use for non-invasive tests when monitoring treatment response in viral hepatitis?

Is there a use for non-invasive tests when monitoring disease progression in chronic liver diseases?

What is the prognostic value of non-invasive tests in chronic liver disease?

Non-invasive methods rely on two different approaches: a “biological” approach based on the quantification of biomarkers in serum samples or a “physical” approach based on the measurement of liver stiffness (LS). Although these approaches are complementary, they are based on different rationales. Serum biomarkers indicate several, not strictly liver specific clinical and serum parameters that have been associated with fibrosis stage, as assessed by liver biopsy, whereas LS corresponds to a genuine and intrinsic physical property of liver parenchyma.

Many serum biomarkers have been proposed for staging liver fibrosis, mainly in patients with chronic hepatitis C. They are summarized in Table 2. The FibroTest® (proprietary formula; Biopredictive, Paris, France, licensed under the name of Fibrosure® in the USA (LabCorp, Burlington, NC, USA)) was the first algorithm combining several parameters [21]. Several other scores or algorithms have been proposed in hepatitis C virus (HCV) [22], [23], [24], [25], [26], [27], [28], [29], [30], [31], [32], [33], [34] and [35], as well as in hepatitis B virus (HBV) [36] and [37], human immunodeficiency virus (HIV)-HCV coinfection [38] and [39], and NAFLD [40] and [41]. Four are protected by patents and commercially available: the FibroMeter® (Echosens, Paris, France), the FibroSpectII® (Prometheus Laboratory Inc. San Diego, CA, USA), the ELF® (Enhanced Liver Fibrosis Test, Siemens Healthcare, Erlangen, Germany) and the HepaScore® (PathWest, University of Western Australia, Australia). Non-patented methods use published models, based on routinely available laboratory values. 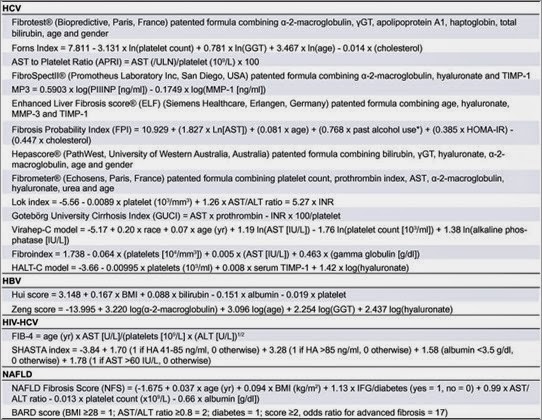 The practical advantages of analyzing serum biomarkers to measure fibrosis include their high applicability (>95%) [42], their good inter-laboratory reproducibility [43] and [44], and their potential widespread availability (non-patented) (Table 3). However, none are liver specific and their results may be influenced by changes in clearance and excretion of each individual parameters. For instance, increased levels of hyaluronate occur in the post-prandial state [45] or in aged patients with chronic inflammatory processes such as rheumatoid arthritis [46]. Also, the reproducibility of measurement of some parameters included in “indirect” serum markers, such as aspartate aminotransferase (AST) levels or platelet count, is questionable [47]. In addition, the interpretation of each test requires a critical analysis in order to avoid false positive or false negative results. For instance, when using FibroTest®, the existence of hemolysis or Gilbert syndrome that can lead to false positive results (by a decrease haptoglobin or an increase in bilirubin, respectively) should be taken into account [48]. Similarly, acute hepatitis can produce false positive results in the aspartate-to-platelet ratio index (APRI), Forns index, FIB-4 or FibroMeter® tests, since all include serum levels of aminotransferases in their formulas. 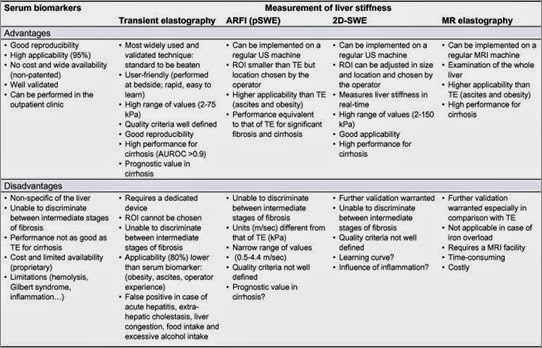 Posted by Hepatitis C Research and News at 2:25 PM