BOSTON--(BUSINESS WIRE)--Merck (NYSE:MRK), known as MSD outside the United States and Canada, today announced the presentation of interim data from the C-SWIFT study exploring the potential of a candidate triple-therapy regimen consisting of the fixed-dose combination of grazoprevir/elbasvir (MK-5172/MK-8742, MK-5172A), the company’s investigational NS3/4A protease inhibitor and NS5A inhibitor, in combination with sofosbuvir, a nucleotide (NS5B) inhibitor for the treatment of chronic hepatitis C virus (HCV) infection. Preliminary findings in treatment-naïve HCV genotype 1- (GT1) infected non-cirrhotic patients, following six and four weeks of treatment, and patients with cirrhotic disease, following eight and six weeks of treatment, will be presented by Dr. Eric Lawitz, vice president, scientific and research development, The Texas Liver Institute, San Antonio, TX and C-SWIFT lead investigator. This poster presentation is part of a late-breaking abstract session at the 65th American Association for the Study of Liver Diseases (AASLD) Annual Meeting, also known as The Liver Meeting®.

“These interim data provide a compelling proof-of-concept for the potential of an eight- or six-week triple therapy course in treatment-naive patients with genotype 1 disease, including cirrhotic patients,” said Dr. Lawitz. “These findings will inform the design of larger studies aimed at understanding the potential of short-duration triple therapy across multiple patient types.”

To date, the investigational triple therapy has shown response rates (sustained virologic response1 [SVR] at 4/8 weeks following therapy) ranging from 80 percent to 94.7 percent in cirrhotic and non-cirrhotic patients following six and eight weeks of treatment in this study, as shown in table 1. The four-week regimen resulted in sub-optimal efficacy. 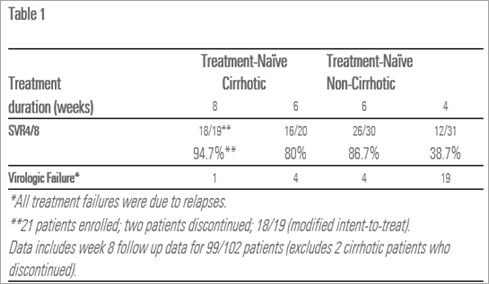 All 28 patients not achieving SVR4/8 relapsed following the end of therapy. Of these patients, 25 (89%) were genotype 1a (GT1a) and three (11%) were genotype 1b (GT1b) [82% of enrolled subjects were infected with HCV GT1a at baseline]. Sequence analysis of virologic failures is so far available for 23 patients. Wild type virus was determined to be the cause in 12 of the relapsed patients. In the other relapsed patients, 10 had elbasvir-resistant viral variants and one had a variant resistant to both grazoprevir and elbasvir.

In this study, the co-administration of grazoprevir/elbasvir and sofosbuvir was generally well-tolerated. The most common adverse events associated with the triple regimen were: headache (4%), fatigue (2%) and nausea (2%). One patient withdrew from the study for reasons unrelated to treatment.

“Our goal is to establish a simple, effective, well-tolerated regimen that is applicable across the diverse population of patients with HCV,” said Dr. Eliav Barr, vice president, infectious diseases, Merck Research Laboratories. “The preliminary data provide us with the confidence to initiate our C-CREST study to evaluate a triple combination comprising Merck’s investigational candidates from three major therapeutic classes of HCV medicines.”

The C-SWIFT study enrolled a total of 102 treatment-naïve patients with HCV genotype 1 (GT1a and GT1b) infection at The Texas Liver Institute, San Antonio, TX. Treatment-naïve, non-cirrhotic patients were randomized to receive the fixed-dose combination of grazoprevir/ elbasvir (one pill containing 100 mg, 50 mg respectively) plus the nucleotide inhibitor sofosbuvir (400 mg) once daily for eight, six or four weeks. Similarly, treatment-naïve, cirrhotic patients were randomized to receive the investigational combination for either eight or six weeks. The primary endpoint of the study is the percentage of patients achieving sustained virologic response 12 weeks after the completion of therapy (SVR12). An additional analysis of patients with genotype 3 (GT3) HCV enrolled in the C-SWIFT study will be presented at a future scientific congress.

Based upon the interim findings from C-SWIFT and data from the Phase 1 clinical trial for MK-3682, also presented at The Liver Meeting®, Merck plans to initiate Phase 2 clinical trials evaluating the efficacy and safety of two short-duration triple therapy regimens: MK-3682 in combination with grazoprevir/elbasvir; and MK-3682 in combination with grazoprevir and Merck’s investigational early-stage NS5A inhibitor MK-8408, in non-cirrhotic HCV patients. Part A of the Phase 2 studies is planned to evaluate eight weeks of therapy among non-cirrhotic HCV-infected patients, and Part B studies may evaluate shorter courses of treatment based on findings from Part A.

To date, no discontinuations due to an adverse event and no drug-related serious adverse events have been reported. Most adverse events were mild or moderate in intensity, with no apparent dose effect. There were no clinically significant abnormalities reported in routine blood and urine biomarker panels and physical examinations. Initial results from this study were previously announced by Idenix Pharmaceuticals in April 2014.

Grazoprevir/elbasvir (MK-5172/MK-8742, MK-5172A) is an investigational, oral, once-daily, fixed-dose combination chronic HCV treatment, consisting of grazoprevir, an investigational oral, once-daily HCV NS3/4A protease inhibitor, and elbasvir, an investigational oral, once-daily HCV NS5A replication complex inhibitor. In October 2013, Merck announced that the U.S. Food and Drug Administration (FDA) granted Breakthrough Therapy designation to grazoprevir/elbasvir for treatment of chronic HCV infection. Breakthrough therapy designation is intended to expedite the development and review of a candidate that is planned for use, alone or in combination, to treat a serious or life-threatening disease or condition when preliminary clinical evidence indicates that the drug may demonstrate substantial improvement over existing therapies on one or more clinically significant endpoints.

For nearly 30 years, Merck has been at the forefront of the response to the HCV epidemic. Merck employees are dedicated to applying their scientific expertise, resources and global reach to deliver innovative healthcare solutions that support people living with HCV worldwide.

Today's Merck is a global healthcare leader working to help the world be well. Merck is known as MSD outside the United States and Canada. Through our prescription medicines, vaccines, biologic therapies and animal health products, we work with customers and operate in more than 140 countries to deliver innovative health solutions. We also demonstrate our commitment to increasing access to healthcare through far-reaching policies, programs and partnerships. For more information, visit www.merck.com and connect with us on Twitter, Facebook and YouTube.

This news release includes “forward-looking statements” within the meaning of the safe harbor provisions of the United States Private Securities Litigation Reform Act of 1995. These statements are based upon the current beliefs and expectations of Merck’s management and are subject to significant risks and uncertainties. There can be no guarantees with respect to pipeline products that the products will receive the necessary regulatory approvals or that they will prove to be commercially successful. If underlying assumptions prove inaccurate or risks or uncertainties materialize, actual results may differ materially from those set forth in the forward-looking statements.

Risks and uncertainties include, but are not limited to, general industry conditions and competition; general economic factors, including interest rate and currency exchange rate fluctuations; the impact of pharmaceutical industry regulation and healthcare legislation in the United States and internationally; global trends toward healthcare cost containment; technological advances, new products and patents attained by competitors; challenges inherent in new product development, including obtaining regulatory approval; Merck’s ability to accurately predict future market conditions; manufacturing difficulties or delays; financial instability of international economies and sovereign risk; dependence on the effectiveness of Merck’s patents and other protections for innovative products; and the exposure to litigation, including patent litigation, and/or regulatory actions.

Merck undertakes no obligation to publicly update any forward-looking statement, whether as a result of new information, future events or otherwise. Additional factors that could cause results to differ materially from those described in the forward-looking statements can be found in Merck’s 2013 Annual Report on Form 10-K and the company’s other filings with the Securities and Exchange Commission (SEC) available at the SEC’s Internet site (www.sec.gov).

Posted by Hepatitis C Research and News at 7:08 PM