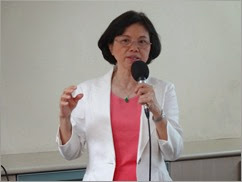 Professor Ming-Shi Chang, PhD, Chair Professor of Biochemistry and Molecular Biology at NCKU, has led the team to make another breakthrough in their research on interleukin 20 (IL-20), the university revealed at a press conference on June 3.

Their research titled “IL-20 and IL-20R1 Antibodies Protect Against Liver Fibrosis” has been published in the May issue of Hepatology.

Currently, NCKU has been granted a patent in the United States of America, US 860347 B1, “Use of IL-20 Antagonists for Treating Liver Diseases”, which has attracted great interest from the biotechnology industry.
Hepatitis, fatty liver disease, and hepatotoxicity are some of the primary disorders that lead to the development of liver diseases, according to Professor Chang, who added that inflammation of the liver can evolve into liver fibrosis and cirrhosis, and that patients with liver cirrhosis at the final stage often develop liver cancer.

Inflammation is the source of many diseases, said Professor Chang. She also said that IL-20 is involved in several inflammatory diseases.

Professor Chang’s team discovered that IL-20 is an important cause of liver diseases, and they confirmed that the liver tissue of patients with liver fibrosis, liver cirrhosis, and liver cancer have significantly higher levels of IL-20. IL-20 causes liver inflammation and increases the amount of extracellular matrix, thus causing liver fibrosis and cirrhosis.

Therefore, Professor Chang went a step further by developing an antibody that inhibits IL-20, which has been tested and confirmed to effectively inhibit liver cirrhosis in mice and to attenuate the fatty liver disease resulting from the inflammation caused by the accumulation of visceral fat. The antibody also significantly recovers the liver function of mice, as attested by reduction of ALT and AST, which are the indicators of liver function.

IL-20 is a protein secreted by the human immune system, Professor Chang said. An excessive amount of IL-20 can damage body tissue and, therefore, lead to many diseases such as osteoporosis and a variety of liver diseases.

Most liver diseases result from liver damage caused by long-term chronic hepatitis. Patients with liver disease include people infected with the hepatitis B and C viruses, as well as alcoholic hepatitis and toxin-induced hepatitis.

Repeated or prolonged chronic hepatitis can seriously damage liver cells. This damage stimulates fibroblasts in the liver to produce collagen fibers, which are then deposited in the liver and fill up the empty spaces left by dead hepatocytes. Finally, this fibrosis causes liver cirrhosis.

Professor Chang and her research team observed that patients with liver fibrosis, liver cirrhosis, and liver cancer also had high levels of IL-20. After investigating this phenomenon, they discovered that IL-20 activates hepatic stellate cells and stimulates transforming growth factor (TGF)-beta1, tumor necrosis factor (TNF)-alpha, and Type I Collagen in these cells to increase the accumulation of extracellular matrix.

Because IL-20 is a protein secreted by the human body, Professor Chang and her research team developed anti-IL-20 monoclonal antibody, which inhibits the functions of IL-20 and stops IL-20-induced liver damage at the same time.

Professor Chang’s research has provided a solution to the therapeutic management of liver fibrosis and a new direction for treating liver diseases.

From the perspective of clinical medicine, anti-IL-20 monoclonal antibody could be an effective drug for treating liver fibrosis, fatty liver diseases, and liver cancer in the future.

At present, there is no marketed medication that can inhibit inflammation and stop liver fibrosis simultaneously.

The development of a new drug that can reverse liver fibrosis and prevent it from developing into liver cancer will benefit millions of patients with liver disease and create a huge business opportunity in the pharmaceutical sector of the world economy.

Posted by Hepatitis C Research and News at 3:10 PM