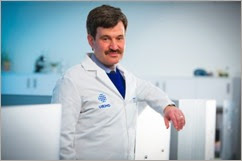 Research by Andrew Talal shows that people who inject drugs want to be educated about hepatitis C and are willing to be treated.

More effective, new medications for HCV infection with fewer side effects also are causing a shift in patients’ attitudes

People who inject drugs and are enrolled in a drug treatment program are receptive to education about, and treatment for, hepatitis C virus, according to a study by researchers at several institutions, including the University at Buffalo.

That finding, published online this week in the Journal of Addiction Medicine will be welcome news to health care providers. The paper notes that injection drug use is a primary mode of infection, making for an HCV infection prevalence as high as 80 percent among people who inject drugs.

Talal and colleagues previously demonstrated that treatment of addiction significantly enhances the ability of people who use drugs to complete HCV therapy.

"These new findings support the premise that addiction-treatment facilities can help provide sustained HCV treatment for this population," Talal says. "These facilities have the added advantage of being able to link HCV care to drug treatment, allowing for closer patient evaluation, which will likely lead to improved adherence to treatment regimens."

HCV infection often is asymptomatic, but 75 to 80 percent of those infected will develop chronic infection that can progress to liver cirrhosis and/or liver cancer, potentially requiring liver transplantation as a life-saving intervention. However, in order to be considered for a liver transplant, people who use drugs must remain "clean" for at least six months.

The study was based on a survey of 320 patients enrolled in a New York City-based methadone treatment program (START Treatment and Recovery Centers). Nearly half of them reported that they had tested positive for HCV infection.

Seventy-eight percent of respondents expressed willingness to participate in HCV-related education and to receive treatment for HCV. More than half of those surveyed correctly responded to at least five of seven questions assessing their knowledge about HCV.

"People who inject drugs have always wanted to be treated for hepatitis C, but there have been a variety of barriers at the patient, provider and institutional levels," says Talal. "Most importantly, there has been a lack of education about the disease, a fear of side effects of interferon, discomfort in conventional health care venues and a lack of awareness of the status of the infection."

In some cases, the percentage of HCV-infected people who use drugs that show up for HCV-related medical appointments is as low as 10 percent, according to Talal.

In the current research, patients cited fear of side effects from interferon, which remains as part of the standard treatment regimen for genotype 1 infection, as a key barrier to their willingness to accept HCV treatment. Interferon can cause multiple side effects, ranging from fatigue, fever, nausea, anorexia, muscle pain and hair loss, to insomnia, depression and irritability. In addition, interferon-based therapies are only effective in eliminating infection in half of those who take it.

"A major change in the attitudes of people who use drugs is due to knowledge about greatly improved treatment efficacy and the ability to provide HCV treatment at the same site as the substance abuse treatment," says Talal.

Talal adds that the New York State law mandating that all individuals born between 1945 and 1965 be offered HCV screening is increasing the number of people diagnosed with the infection, thereby also making them more receptive to HCV education and treatment.

This study, funded by the Viral Hepatitis Action Coalition and performed in collaboration with the Centers for Disease Control and Prevention, documents the initial phase of a project called Prevention, Evaluation and Treatment of Hepatitis C in Opiate Agonist Treatment (PET-C). Led by Talal, the project's goal is to assess how telemedicine can be used to evaluate a model of HCV treatment for people who inject drugs and are enrolled in a drug treatment program.

Talal conducts research on HCV in UB's Clinical and Translational Research Center and he sees patients as a physician with UBMD, the practice plan of the UB School of Medicine and Biomedical Sciences. He previously served on the advisory board for Abbott Molecular, received support from Gilead Sciences and disclosed a prior relationship with Vertex Pharmaceuticals, all of which helped sponsor the study.

Posted by Hepatitis C Research and News at 9:16 PM