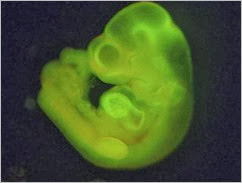 A mouse embryo formed with Stimulus-Triggered Acquisition of Pluripotency (STAP) cells is seen in this undated image released by RIKEN Center for Developmental Biology on January 28, 2014.
CREDIT: REUTERS/HARUKO OBOKATA/RIKEN CENTER FOR DEVELOPMENTAL BIOLOGY/HANDOUT VIA REUTERS

(Reuters) - In experiments that could open a new era in stem cell biology, scientists have found a simple way to reprogram mature animal cells back into an embryonic-like state that allows them to generate many types of tissue.

The research, described as game-changing by experts in the field, suggests human cells could in future be reprogrammed by the same technique, offering a simpler way to replace damaged cells or grow new organs for sick and injured people.

Chris Mason, chair of regenerative medicine bioprocessing at University College London, who was not involved in the work, said its approach in mice was "the most simple, lowest-cost and quickest method" to generate so-called pluripotent cells - able to develop into many different cell types - from mature cells.

"If it works in man, this could be the game changer that ultimately makes a wide range of cell therapies available using the patient's own cells as starting material - the age of personalized medicine would have finally arrived," he said.

The experiments, reported in two papers in the journal Nature on Wednesday, involved scientists from the RIKEN Center for Developmental Biology in Japan and Brigham and Women's Hospital and Harvard Medical School in the United States.

The researchers took skin and blood cells, let them multiply, then subjected them to stress "almost to the point of death", they explained, by exposing them to various events including trauma, low oxygen levels and acidic environments.

One of these "stressful" situations was simply to bathe the cells in a weak acid solution for around 30 minutes.

Within days, the scientists found that the cells had not only survived but had also recovered by naturally reverting into a state similar to that of an embryonic stem cell.

These stem cells - dubbed Stimulus-Triggered Acquisition of Pluripotency, or STAP, cells by the researchers - were then able to differentiate and mature into different types of cells and tissue, depending on the environments they were put in.

"If we can work out the mechanisms by which differentiation states are maintained and lost, it could open up a wide range of possibilities for new research and applications using living cells," said Haruko Obokata, who lead the work at RIKEN.

Stem cells are the body's master cells and are able to differentiate into all other types of cells. Scientists say that by helping to regenerate tissue and potentially grow new organs, they could offer ways of tackling diseases for which there are currently only limited treatments.

There are two main types of stem cells: embryonic ones, harvested from embryos, and adult or iPS cells, which are taken from skin or blood and reprogrammed back into stem cells.

Because the harvesting of embryonic stem cells requires the destruction of a human embryo, the technique has been the subject of ethical concerns and protests from pro-life campaigners.

"Whether human cells would respond in a similar way to comparable environmental cues ... remains to be shown," he said in an emailed comment. "I am sure that the group is working on this and I would not be surprised if they succeed even within this calendar year."

Robin Lovell-Badge, a stem cell expert at Britain's National Institute for Medical Research, said it would be some time before the exact nature and capabilities of the STAP cells would be fully understood by scientists - and only then would their full potential in medicine become clearer.

"But the really intriguing thing to discover will be the mechanism underlying how a low pH shock triggers reprogramming," he said. "And why does it not happen when we eat lemon or vinegar, or drink cola?"

Posted by Hepatitis C Research and News at 4:15 PM