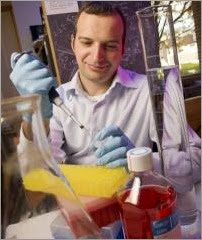 Rutgers University scientists have determined the structure of a hepatitis C surface protein, a finding that could assist in the development of a vaccine to halt the spread of the the deadly disease that has infected 3.2 million Americans.

Hepatitis C is constantly mutating, allowing it to infect a host cell and evade the immune responses, causing chronic infection that can be difficult to treat. By identifying the structure of virus's outer protein, Marcotrigiano, the study's lead author, says scientists will be better able to develop a vaccine that targets the immune system to vulnerable regions of the virus in order to prevent infection.

"Viruses are smart and it is a constant battle to keep them out," says Marcotrigiano who collaborated on the research with colleagues from the Center for Advanced Biotechnology and Medicine at Rutgers and Emory University School of Medicine. "That's why the development of a vaccine is so important. It's always better to prevent infection through an effective vaccine then to treat after a chronic infection has been established."

Hepatitis C virus is a major global health problem with 160 million people infected throughout the world, about four times more individuals than those with HIV. Most of those infected do not show symptoms until the virus – the number one cause of liver transplantation – has caused severe liver damage.

The virus is mainly spread through contact with an infected person's blood, such as sharing of needles. Prior to 1992, when donated blood began being tested, the virus was also spread through blood transfusions and organ donation.

Recently, the Food and Drug Administration approved several new drugs that could cure many patients infected with hepatitis C in as little as 12 weeks. However, at about $1000 per pill, this may not be a cost-effective solution to hepatitis C virus.

Developing a vaccine against hepatitis C would not only prevent people from acquiring the disease, Marcotrigiano says, but would also be the most cost-conscious health intervention.

Michael Houghton, a researcher at the University of Alberta in Canada, has been developing a vaccine that is currently being tested clinically. Houghton, who led a team that discovered the hepatitis C virus in 1989, says the Rutgers finding is important because knowing the structure of the virus will help in the development of a vaccine that enables the immune system to produce more infection-fighting antibodies that can neutralize the virus.

Posted by Hepatitis C Research and News at 11:15 PM