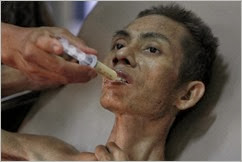 A terminally ill man receives treatment at a hospice for those dying of AIDS, at Wat Prabat Nampu Buddhist temple in Lopburi on World AIDS day December 1, 2011. REUTERS/Sukree Sukplang

BANGKOK (Thomson Reuters Foundation) – The Foundation for AIDS Research (amfAR) has launched the first regional study in Asia looking at obstacles in treating people living with hepatitis C and HIV in low and middle-income countries.

Greater access to the antiretroviral therapy (ARV) has helped give HIV-positive people longer and better lives, but chronic health problems such as hepatitis C and tuberculosis are causing premature and unnecessary deaths, experts say.

Hepatitis C - which is prohibitively expensive to treat - can be cured but is often undiagnosed. Left untreated, the virus can lead to deadly liver disease.

An estimated 5 million people living with HIV worldwide - about 15 percent of all who are HIV-positive - are also infected with hepatitis C, of which a fifth are in Asia, according to amfAR.

“Our concern is that we can invest all our resources we have in treating somebody with HIV and give them the optimal antiretroviral therapy that we have access to, but they can still die of liver failure,” amfAR’s vice president Annette Sohn said Thursday.

“We know how to treat these infections, we just need the tools and distribute the knowledge to make that happen,” said Sohn, who is also director of amfAR’s Therapeutics Research, Education, and AIDS Training in Asia (TREAT Asia).

The high cost for treatment, side effects including severe flu-like symptoms and a lack of experience in care for co-infected patients mean many in Asia go untreated, Sohn said.

In December, U.S. regulators approved a pill with fewer side effects, but it costs $1,000 a day and requires 12 weeks of treatment.

“We don’t see those drugs becoming immediately accessible in the low- and middle-income countries in the near future,” she said. “There are people who are dying of liver failure. We don’t feel like we can afford to wait.”

DRUG USE AND CO-INFECTION

The study, launched on Jan. 6 and expected to last a few years, will be implemented in four HIV treatment centres in the capitals of Indonesia, Thailand, Vietnam and Malaysia.

A total of 200 HIV-positive patients with hepatitis C or signs of liver disease will be offered free hepatitis C treatment integrated within routine HIV care. They will also receive support and education on treatment.

“What we’re hoping is through this project we learn as much as we can about what to do and what not to do in order to implement this sort of a programme on a broader scale,” Sohn said.

Experts say a large number of patients co-infected with HIV and hepatitis C are current or former injecting drug users.

A 2010 report by the Thai AIDS Treatment Action Group (TTAG) said about 90 percent of the roughly 30,000 to 60,000 injecting drug users in Thailand who are HIV positive also carry the hepatitis C virus.

In an interview with Thomson Reuters Foundation, TTAG said Thailand's failure to treat hepatitis C in HIV-positive injecting drug users means the HIV remains highly infectious in this group and is more likely to spread to other people.

This is one thing the amfAR study hopes to prevent.

“One of the main reasons why these countries were selected was because they have concentrated epidemics within populations of people who inject drugs or who have injected drugs in the past,” said Sohn, who added that HIV and hepatitis C co-infections have not received much attention in part because of stigma and discrimination.

“We cannot possibly control our HIV epidemic and hepatitis C epidemic… unless we ensure that people who inject drugs, whether currently or in the past, are included in these interventions and research studies.”

Posted by Hepatitis C Research and News at 9:01 AM