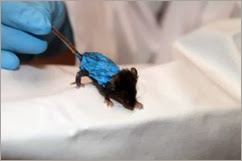 Scientists covered the mice with blue latex to prevent evaporation from the skin and thus stop the heat loss. With this loss the mice stopped accumulating fat in the liver. This shows that the skin is communicating with the liver. (Credit: Birgitte Svennevig/SDU. Film: Henrik Gautier/SDU)

Dec. 6, 2013 — Researchers from the University of Southern Denmark have discovered that the skin is capable of communicating with the liver. The discovery has surprised the scientists, and they say that it may help our understanding of how skin diseases can affect the rest of the body.

Professor Susanne Mandrup and her research group in collaboration with Nils Færgeman's research group at the Department of Biochemistry and Molecular Biology at the University of Southern Denmark was actually studying something completely different when they made the groundbreaking discovery: That the skin, which is the body's largest organ, can "talk" to the liver.

"We have showed that the skin affects the metabolism in the liver, and that is quite a surprise," say Susanne Mandrup and Ditte Neess, a former student in the Mandrup research group and now laboratory manager in Professor Nils Færgeman's group.

The phenomenon was observed in the researcher's laboratory mice. The Mandrup and Færgeman groups work with so-called knock-out mice, in which a specific fat binding protein called acyl CoA binding protein has been removed (knocked out). Some knock-out mice produced by the researchers had a strange greasy fur, and they had difficulties being weaned from their mother. In the weaning period they gained less weight and showed a failure to thrive. Analyses also showed that the mice accumulated fat in the liver at weaning.

"At first we thought that the fat accumulation in the liver was linked with the fact that the gene was missing in the liver of the knock-out mice. But this was ruled out by a series of studies, and we had to find another explanation," says Ditte Neess.

She and her colleagues took another look at the rumpled and weak knock-out mice. Their fur was greasy, and they had a leaky skin from which they lost more water than normal mice.

"When they lose water, they also lose heat. We therefore asked ourselves whether this water and heat loss could be the reason why the mice accumulated fat in the liver and became weak when weaned from their mother," says Ditte Neess.

To get to the bottom of how a defect in the skin "talks" to the liver, the researchers decided to cover the mice with Vaseline. This would prevent water evaporating from the skin and thus stopping the heat loss. As a result the fat accumulation in the liver disappeared. But as Vaseline contains fat, that could theoretically be absorbed by the skin or ingested by the mice, the researchers were a little unsure if there were side effects from the Vaseline. A student proposed to cover the mice with liquid latex, which she found in a local sex shop.

Having covered the mice in blue latex the researchers saw that fat accumulation in the liver again disappeared.

"We believe that the leaking of water from the skin makes the mice feel cold, and that this leads to breaking down of fat in their adipose (fat) tissue. The broken down fat is then moved to the liver. The mice move energy from the tissues to the liver," Susanne Mandrup and Ditte Neess explain.

The above story is based on materials provided by University of Southern Denmark.

Posted by Hepatitis C Research and News at 2:01 PM