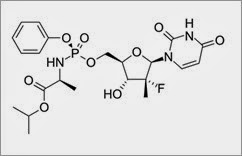 Life-saving: the sofosbuvir molecule has been approved in the US and Europe for the treatment of hepatitis C

New York, 23 December 2013 (IRIN) - Following approvals in the US and Europe this month of a new drug to treat hepatitis C, activists are pushing for the medication to be made available in poor countries, a development reminiscent of the activism that forced down HIV/AIDS drug prices a decade ago in Brazil, South Africa and Thailand.

The World Health Organization (WHO) estimates that as many as 185 million people are infected with hepatitis C, which is often called a “viral time bomb” because it can exist, undiagnosed, in a person’s body for many years without causing symptoms.

According to the Open Society Foundations (OSF), more than 350,000 people die every year from liver disease related to the virus, and every year an estimated three to four million more people are infected.

Many of these people are co-infected with HIV; the illnesses are both blood-borne and have shared routes of transmission, particularly injecting drug use.

Unlike HIV, hepatitis C can be cured. But current treatment options have serious side effects, do not always work and are unaffordable for most people. The existing treatment, pegylated interferon, which is manufactured by Roche and Merck, can cost as much as US$18,000 for a 48-week course.

Interferon, which must be injected, can, in combination with the drug ribavirin, cure 40-70 percent of patients who use it. But its high cost has kept it out of reach for most patients, except in Egypt and Thailand, where the governments were able to negotiate significant price reductions with drug manufacturers.

“How have we got to a global system where new drugs being developed are out of reach of most of the population?”

The new drug, sofosbuvir, released by pharmaceutical giant Gilead, promises a leap forward in the hepatitis C treatment. It is orally administered, reduces treatment time to 12 weeks, has fewer side effects, and, if used in combination with other drugs, can achieve a 90 percent cure rate. The hitch?

In the US, which has some of the highest drug prices in the world, Gilead is expected to charge $80,000 for one course of treatment - more than four times the cost of interferon. While the cost of the drug is likely to be lower elsewhere, healthcare advocates fear the price will remain beyond the reach of poor people.

Médicins Sans Frontières’ director of policy and analysis, Rohit Malpani, says the drug has been priced so high because it cost the company $11 billion to acquire Pharmasset, the original maker of the drug.

According to one analyst, Gilead has to make $4 billion on the drug annually, to justify the high cost of the buyout.

This is not a reflection of the research and development costs; it is an assessment of how much the company can get for it, Malpani adds. “Companies will engage in extensive studies to determine what the market will bear, but that is not the way that life-saving commodities should be priced.”

MSF’s Access Campaign, which lobbies for affordable medicines for resource-strapped communities, is waiting for Gilead to finalize its “access strategy” for poor countries after having received input from a range of organizations.

A Gilead spokesperson told IRIN that it would announce the details of its access programme early next year. The company says it is “committed to making its medicines available to patients, regardless of where they live or their ability to pay”, and that it is “working very closely with advocates in communities that are affected by hepatitis C to develop an appropriate access and pricing strategy”.

The spokesperson said Gilead wanted to “help ensure access to Sovaldi [the brand name for sofosbuvir] in resource-limited countries, especially countries that have a high hepatitis C burden”.
However, Malpani is not optimistic that the reduced price will be low enough to make the drug widely accessible. Furthermore, MSF believes Gilead is likely to offer “middle-income” countries - like China, Iran and Ukraine - a higher pricing strategy than that given to poor countries.
Ironically, 75 percent of the world’s poor reside in middle-income countries, Malpani said. “Our concern with Gilead’s access strategy is that it is likely to be unaffordable and punitive to the countries in that category,” he said.

MSF would like to set a target price for the drug of less than $500. However, according to an OSF report, "Unfortunately, past experience with HIV suggests that drug companies are unlikely to voluntarily extend significant discounts to middle-income countries, even if they may be open to reducing the price for the world's poorest."

According to one study, a 12-week course of sofosbovir could cost as little as $62-$134 to produce.
Asked why the drug was so expensive in the US, the Gilead spokesperson said: “We believe that the price of Sovaldi in the United States is fair, based on the value it represents to a larger number of patients.” A special programme for those unable to afford it would be available, he added.
“But the starting point is so outrageous, not even halving it would make it accessible,” says Els Torreele, director of OSF’s Access to Essential Medicines Initiative.

“How have we got to a global system where new drugs being developed are out of reach of most of the population? It’s totally normal today to price drugs at $100,000. Something is wrong with a system where drugs that so many people need are costing so much. This is not sustainable for anyone,” she said.

Daniel Wolfe, director of the International Harm Reduction Development Program at OSF, said that because of its association with HIV and drug use, hepatitis C is still highly stigmatized. “The experience of HIV has shown us that the combination of expensive medication and social stigma is deadly,” he said.

He added that companies are pricing their drugs for profit rather than public health concerns. “When governments are confronted by high prices for a stigmatized population affected, they tend to look the other way,” Wolfe said.

In India a “patent opposition” has been filed by the Initiative for Medicines Access and Knowledge (I-MAK) to stop Gilead from obtaining a patent on the drug there, which would clear the way for low-cost generics to be manufactured.

India has long been at the forefront of manufacturing generic life-saving drugs. Under its Patent Act, medications that are not new do not qualify for patent protection; I-Mak argues that sofosbuvir is “old science” stemming from a long line of antiretroviral drugs.

The World Trade Organization’s 1995 Trade-related Aspects of Intellectual Property Rights (TRIPS) agreement laid down minimum standards for patent laws. There is, however, “some flexibility for countries to determine what is meant under the criteria of patentability”, says Torreele, citing I-MAK’s case against Gilead’s sofosbuvir patent.

Since social activism helped force down the cost of AIDS drugs with generic alternatives over a decade ago, “the world has changed,” says Torreele. “The solutions to making HIV drugs affordable are not there anymore.”

While TRIPS makes allowances for governments to override patent laws to protect public health, “there is lots of pressure by the pharmaceutical industry on them to avoid these measures”.

And negotiations, spearheaded by the US, are currently taking place with 11 other countries to finalize the Transpacific Partnership Agreement, a trade deal that some worry could undermine the flexibility allowed by TRIPS.

Posted by Hepatitis C Research and News at 10:37 AM