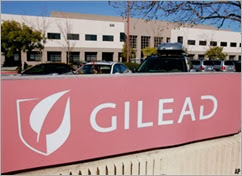 Bloomberg reporter Drew Armstrong said on Twitter that Express Scripts' chief medical officer, Steve Miller, told him that the convenience of Sovaldi's one-pill-a-day regimen won't necessarily justify the $84,000 price tag for a 12-week regimen. "We will identify which drugs can be pitted against each other and make some really tough formulary decisions," Armstrong quoted him as saying.

This was a positive sign for AbbVie's regimen, which has so far performed as well as Sovaldi in clinical trials but involves four different drugs. Coincidentally, early Tuesday AbbVie released a second round of data from the regimen's phase-three program, showing a 96% sustained response rate among patients with the most common genotype of the virus who'd failed previous treatments.

ISI Group analyst Mark Schoenebaum wrote in an email to clients that while Express Scripts' size (around 100 million lives covered) gives it considerable leverage on these matters, the impact on Gilead might not be felt for a few years out.

Posted by Hepatitis C Research and News at 11:31 PM