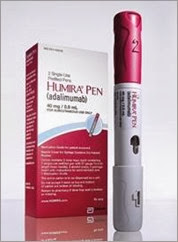 Goldman Sachs's Jami Rubin asserted in her company assessment on Monday that AbbVie has become an underestimated player in fields as diverse as hepatitis C, chronic lymphoid leukemia (CLL) and breast cancer.

However there are some hang-ups surrounding AbbVie's future. Among them are its current dependence on autoimmune drug Humira. The company spun off from Abbott with this multi-indicated medication as its cornerstone, and Rubin said it provides around 50% of the company's sales. Although the patent wears off in 2016, Rubin indicated that this should not bury the drugmaker.

Instead, she expects AbbVie's pipeline will start providing financial ballast in 2015 with its hep. C contender, and then again in 2016 or 2017 if the company's CLL drug ABT-199 and its Phase-III endometriosis/Phase-II uterine fibroid treatment Elagolix meet FDA requirements.

Although the hep. C and CLL categories appear to have some built-in competition, such as Gilead's sofosbuvir and Johnson & Johnson's ibrutinib, Rubin's analysis indicated that AbbVie is in a position to exploit the weaknesses of its competitors with the everyday metric that influence sales: price.

As an example, she noted that AbbVie expects to file its hep. C drug in the first part of 2014 with a projected 2015 launch, timing which will put it right up against Gilead's all-oral program. Rubin says the pill burden—two pills twice daily along with one ribavirin pill daily for AbbVie's regimen, compared with Gilead's regimen of a once-daily pill with or without ribavirin once or twice daily—gives Gilead a superficial disadvantage because the cure rates appear similar, and payers are going to gravitate toward a cheaper option.

Rubin also noted that cheaper does not mean AbbVie would have to drop a financial tier, because on-market drugs like Vertex's Incivek and Merck's Victrelis—two currently marketed protease inhibitors—represent a floor AbbVie may not have to hit because AbbVie's experimental drug has a better virus-clearing rate.

Rubin said these numbers give AbbVie room to maneuver, as long as it is willing to pursue rebating or discounting as part of its competitive hep. C model, a strategy she notes is of particular importance because government programs—Medicare, Medicaid, VA, prisons—cover around 50% of hep. C cases.

Rubin also wrote that AbbVie's ABT-199, developed with Roche, also has a chance against J&J's ibrutinib, Gilead's idelalisib, Infinity's PI3K inhibitor IPI-145, and Roche's GA101/Gazyva in the CLL space. She described the landscape as fierce but said ABT-199 looks poised to win on efficacy.

The Goldman Sachs analyst added that AbbVie's Elagolix has a large market—around 7.5 million women have endometriosis—and that AbbVie's treatment has “significant advantages over current care.”

The pipeline also has some negatives. Rubin pointed out that the MS drug daclizumab, which is being developed with Biogen Idec, has safety and tolerability issues that undercut its efficacy profile. Rubin said heat surrounding new oral agents “with less safety concerns,” limit the injection's appeal, in addition to expected competition from generic Copaxone, which is expected to surface next year.

Posted by Hepatitis C Research and News at 4:39 PM