By Ben Hirschler 1 hour ago 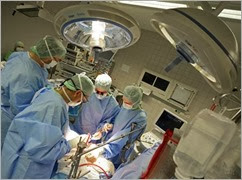 Professor Karl Oldhafer, chief physician of general and visceral surgery at the Asklepios Hospital Hamburg-Barmbek, (2nd L) and his team perform liver surgery, one of the first surgeries of its kind in Germany with the support of a tablet computer to access and visualize planning data, in Hamburg in this August 15, 2013 file photo.
CREDIT: REUTERS/FABIAN BIMMER/FILES

LONDON (Reuters) - A new battle is looming over access to antiviral medicines in developing countries - this time for treating hepatitis C - more than a decade after a global showdown over the price of AIDS drugs in Africa.

Modern pills being launched in western markets could cure the liver-destroying infection in tens of millions of people from China to Congo, or even eradicate the disease entirely. But that will only happen if the cost falls dramatically.

Drugmakers like Gilead Sciences, whose product Sovaldi won U.S. approval this month with a $1,000 a day price tag, are under mounting pressure to strike deals to avoid a rerun of the disputes that stalled early access to HIV therapy.

"Affordability is an urgent and pressing issue," World Health Organization (WHO) Director General Margaret Chan told Reuters during a visit to London.

"These drugs are very expensive. How can we address this? I hope we can learn from the lesson of HIV and find solutions without confrontations."

In the 1990s, HIV/AIDS drugs costing more than $10,000 per patient a year were simply out of reach for millions of people in the developing world. Today, thanks to cheap generics from India, the cost for the poor has been slashed to around $100.

Like HIV, hepatitis C (HCV) can be spread through blood, often via contaminated needles. The WHO estimates that 150 million people worldwide are chronically infected, putting them at risk of cirrhosis and liver cancer.

But whereas the burden of HIV is largely in sub-Saharan Africa, most cases of HCV are in middle-income countries like China, India and Russia, where drug companies are more reluctant to accept rock-bottom prices.

Chan said options for maximizing use of the drugs could include granting licenses to low-cost generic drug manufacturers in India and other countries, as has happened with HIV drugs and also Roche's flu pill Tamiflu.

Gregg Alton, Gilead's head of corporate and medical affairs, said his company was working on plans to help ensure access to Sovaldi in resource-limited countries and aimed to set out details early in 2014.

Other companies developing all-oral treatment regimens for HCV - such as Johnson & Johnson, AbbVie, Bristol-Myers Squibb and Merck & Co - also recognize they need to tackle the issue.

"We are going to be responsible players to make sure that people get access," said Paul Stoffels, head of pharmaceuticals at J&J. "There is a lot of pressure on us to make this available."

Like Gilead, J&J is not yet ready to disclose its access plans and Stoffels said in an interview it would take a couple of years before really simple all-tablet regimens suitable for use in poorer nations were widely available.

While Gilead's Sovaldi has broken new ground as the first pill to treat some HCV patients without injections of interferon, which can cause severe flu-like symptoms, it is still supposed to be given alongside interferon in others.

There is little doubt the new drugs will transform HCV treatment - and prove hugely profitable. In the developed world, they are tipped to become major blockbusters, with consensus sales forecasts for Sovaldi alone standing at $6.8 billion in 2018, according to Thomson Reuters Pharma.

Healthcare campaigners expect corporate schemes for poorer countries will focus on price discounts in middle- and low-income markets - but they argue this as a poor substitute for full generic competition, which could send prices tumbling.

In a bid to force the issue and allow Indian generic manufacturers to make cheap copies of the drug for distribution at home and in some other poor countries, a legal group has filed a motion opposing the patenting of Sovaldi in India.

The New York-based Initiative for Medicines, Access and Knowledge, or I-MAK, which claims the science behind Gilead's drug is not new, says it is taking the action to push prices down massively from the $84,000 that 12 weeks of treatment will cost in the United States.

"We think it has to be below $500," said Tahir Amin, the group's co-founder. "We have seen with HIV that only when you really bring the price down do people really get access."

Medecins Sans Frontieres (MSF), a campaigning group which provides humanitarian care, has thrown its weight behind the I-MAK patent challenge and Leena Menghaney, MSF campaign manager for India, said a sub-$500 price was a prerequisite for many governments to start considering use of the new drugs.

Looking simply at the cost of production, Andrew Hill, a pharmacologist at the University of Liverpool, thinks such a price target is certainly achievable. In fact, he calculates that large-scale production is possible for just $1 a day - or one thousandth of the Sovaldi price tag.

For a three-drug combination, he estimates a target price of between $100 and $250 for 12 weeks of treatment is realistic, including a margin for profits.

Of course, drug prices take account of more than just the cost of goods. They also reflect the value that medicines can offer society and Gilead argues its price is fair based on the significant benefits it brings.

The total cost of the 12-week regimen is also not so different to current treatment, which requires 24 or 48 weeks of interferon-based therapy and is less effective. And Gilead has ploughed an awful lot of money into this new medicine after paying $11 billion in 2012 for Pharmasset, the company that initially developed Sovaldi.

Still, the $1,000-a-day price tag has raised concerns even among some healthcare providers in the United States.

"Obviously, drug companies need to make a return on investment," said Hill. "The question is how much?"

Posted by Hepatitis C Research and News at 8:25 AM