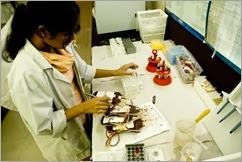 In India, access to safe blood is mandated by law and is the primary responsibility of the National AIDS Control Organisation. Photo: Mint

New Delhi: India’s government blood banks will not be able to guarantee safe blood for the next 90 days because they have run out of stocks of HIV, Hepatitis-B and Hepatitis-C diagnostic kits, and the result could be a scramble for safe blood.

In India, access to safe blood is mandated by law and is the primary responsibility of the National AIDS Control Organisation (NACO). The organization is charged with the task of providing diagnostic kits to 1,137 government blood banks in the country that test each unit of blood for infections before use.

In the absence of the kits, they will not be able to approve the use of blood.

The situation has arisen due to the failure to procure testing kits in time.

In the absence of centrally procured diagnostic kits, NACO has authorized local purchase by blood banks, which officials maintain would help in uninterrupted supplies.

“We are aware of the flaws in the system and are already working on correcting them,” said Shobini Rajan, assistant director general, NACO, accepting that there is currently a blind spot when it comes to tracking stock of kits.

“There is a lack of uniformity (across the banks) as poorer states tend to see more stock out. We are toying with the idea of decentralizing this (procurement) slowly. It would be better for state governments to take more ownership, do their own stock-taking, and obtain facility level insight. Meanwhile, orders have been placed and supplies are likely to resume by the end of January,” Rajan added.

his isn’t the first time blood banks have run out of testing kits.

The problem was most acute in January this year, when government-run blood banks in India were completely stocked out, resulting in NACO authorizing local purchase of the diagnostic kits using funds generated by blood banks.

Nor is NACO the only agency to have woken up late to a health problem, highlighting one of the most significant, yet common problems ailing the government’s healthcare initiatives. There are similar problems in combating malaria and tuberculosis (TB).

All three of India’s largest health interventions have seen stock-outs this year, said an expert.

“We have seen TB, and malaria (medicines) and HIV (testing kits) stock-outs. All national programmes had to resort to emergency procurement after normal channels failed,” said Leena Menghaney, a lawyer and activist with international medical humanitarian aid organization Médecins Sans Frontières, or Doctors Without Borders. She added that healthcare systems need to have reporting mechanisms built into them, ensuring that every facility-level stock-out can be mapped, with community-based organizations being able report shortage of stocks. “We welcome that the government has made emergency purchase orders to deal with the current crisis of diagnostics, drugs and other health products,” Menghaney said.

The failure to procure medicines in time is crippling the national malaria programme in the north-eastern states and Odisha that see a high incidence of malaria. To be sure, with the onset of winter, the incidence of malaria declines across the country.

The malaria control programme comes under the National Vector Borne Disease Control Programme (NVBDCP). According to officials familiar with the development who did not want to be identified, the north-eastern states and Odisha suffered the shortfall all through the peak malaria season, May to September.

“We have received reports of stock-outs from Odisha and the North-East,” said A.C. Dhariwal, director, NVBDCP. “We changed the policy for NE (North-East) states and now they are supposed to procure their own medicines. For other states like Odisha, we have been tiding over crisis situations like stock-outs by diverting supply from other states where there is a surplus.”

Dhariwal’s reference is to an April decision by the ministry to change the anti-malarial medicine used in the seven north-eastern states, a decision that some activist groups claim was not communicated to the local governments. Mint couldn’t independently verify this.

Meanwhile, fresh reports of stock-outs in TB drugs are coming in the backdrop of the health ministry’s failure to procure essential tuberculosis drugs since 2012. TB drug stock-outs were reported as early as May, after which emergency tenders were floated and drugs were procured.

Posted by Hepatitis C Research and News at 6:39 PM