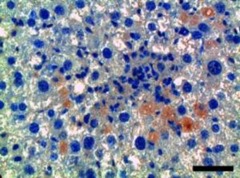 Chronic liver disease is a leading cause of death in the United States, in part because it often causes the formation of harmful scar tissue -- a process known as fibrosis. A study published by Cell Press August 15 in the journal Immunity reveals the central role the immune molecule interleukin 33 (IL-33) plays in the formation of liver fibrosis. The findings suggest that drugs targeting this molecule could serve as a new treatment strategy to protect against liver fibrosis.

"Currently, the therapeutic options for liver fibrosis are limited and not curative," says senior study author Stefan Wirtz of Friedrich-Alexander University Erlangen-Nuremberg. "We identified novel immunological factors that contribute to the development of liver fibrosis, opening up new avenues for the treatment of this serious condition."

Liver fibrosis refers to the accumulation of harmful deposits of extracellular matrix (ECM) proteins, and it can eventually lead to organ failure. Past studies have suggested that this kind of damage is associated with abnormal immune responses in the liver, but very little was known about the molecules and cells that contribute to fibrosis.

In the new study, Wirtz and his team found that the amount of IL-33 in the blood was higher than normal in patients with liver disease. Following up on this observation, they discovered that injection of IL-33 into mice caused ECM proteins to build up in the liver, whereas mice that were genetically modified to lack IL-33 were largely protected from fibrosis. The researchers went on to identify the immune networks underlying IL-33's harmful effects and discovered that this molecule activates immune cells called type 2 innate lymphoid cells (ILC2), which had never before been linked to liver disease.

"Our findings reveal IL-33 as a novel biomarker that could potentially lead to early detection of fibrosis in patients, which may be extremely valuable for preventing further damage to the liver," Wirtz says. "Moreover, the study shows that drugs targeting IL-33 or ILC2 responses could be a promising strategy to protect against fibrosis and chronic liver disease."

Posted by Hepatitis C Research and News at 5:43 PM