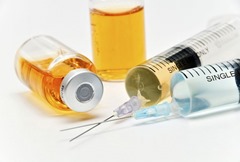 A promising new AIDS vaccine being developed at Oregon Health & Science University has demonstrated the capacity to effectively remove all traces of an AIDS-causing virus from non-human primates, according to a newly published report in the journal Nature.

The vaccine is being tested on a primate form of HIV, called simian immunodeficiency virus (SIV), which causes AIDS in monkeys. After working further to refine the vaccine, OHSU scientists said they hoped an HIV-form of the potential vaccine could soon be tested in human subjects.

“To date, HIV infection has only been cured in a very small number of highly-publicized but unusual clinical cases in which HIV-infected individuals were treated with anti-viral medicines very early after the onset of infection or received a stem cell transplant to combat cancer,” said Dr. Louis Picker, associate director of the OHSU Vaccine and Gene Therapy Institute. “This latest research suggests that certain immune responses elicited by a new vaccine may also have the ability to completely remove HIV from the body.”

In conjunction with researchers at two other American institutions, the Picker lab’s approach uses the cytomegalovirus (CMV), a common virus carried by a large percentage of the population that typically causes no symptoms. The researchers found that pairing CMV with SIV had a unique and desirable effect. CMV engineered to express SIV proteins results in the generation and indefinite maintenance of so-called “effector memory” T-cells that are designed to seek out and destroying SIV-infected cells.

T-cells are a vital component of the body’s immune system. Unfortunately, T-cells drawn out as an immune system response to conventional vaccines of SIV are not able to eradicate the virus. However, the SIV-specific T-cells elicited by the altered CMV were different. About half of the monkeys given highly pathogenic SIV after being vaccinated with the modified vaccine still became infected with SIV, but over time their bodies eliminated all traces of the virus.

The researchers said the ‘virus hunters’ of the affected primates’ bodies were given a much better targeting system by the new vaccine candidate – along with better weapons to locate and destroy their elusive enemy.

“Through this method we were able to teach the monkey’s body to better ‘prepare its defenses’ to combat the disease,” Picker said. “Our vaccine mobilized a T-cell response that was able to overtake the SIV invaders in 50 percent of the cases treated.”

“Moreover, in those cases with a positive response, our testing suggests SIV was banished from the host,” he added. “We are hopeful that pairing our modified CMV vector with HIV will lead to a similar result in humans.”

The vaccine researchers said they are now investigating the potential reasons why only a fraction of the animals treated had a positive reaction to the vaccine. They added that the effectiveness of the vaccine candidate could potentially be boosted.

Speaking in front of the 246th gathering of the American Chemical Society in Indianapolis, Stanford chemist Paul Wender said AIDS might be curable in two years thanks to prostratin, a drug candidate made from the bark of a Samoan tree.

Wender said preliminary tests are currently being done on animals, but blood from AIDS patients who have been on immunosuppressive therapy is also being tested and the results appear positive.

Posted by Hepatitis C Research and News at 10:23 AM