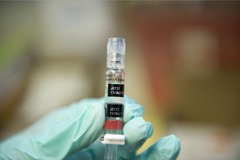 A nurse loads a syringe with a vaccine against hepatitis B. No vaccine exists yet for hepatitis C, with which 28 million Indonesians are infected. (AFP Photo/Robyn Beck)

Aris was diagnosed with hepatitis C in 2001. For the previous four years, he had injected heroin daily. Sometimes he shared needles, syringes and other injecting equipment with friends, unaware that this practice can easily transmit blood-borne viruses like hepatitis B and C, and HIV, the virus that can lead to acquired immune deficiency syndrome (AIDS).

“I didn’t know anything about safe injecting and harm reduction,” he said. “I was offered to be tested for HIV by a health worker, and thought, ‘It wouldn’t hurt to find out about hepatitis C, too.’ I tested positive for both.”

Indonesia has one of the highest rates of viral hepatitis in Southeast Asia. Aris is one of 28 million people in the country living with the hepatitis C virus. Of these 28 million, half could potentially progress to chronic liver disease, and over a third to liver fibrosis and liver failure or cancer. Hepatitis and other liver-related disease is a leading cause of death among Indonesians.

According to the Health Ministry, more than 7 million people across 21 provinces — or more than 2 percent of the country’s population — had hepatitis C as of 2007. People who inject drugs and live with HIV carry an especially heavy disease burden. Anecdotally, it’s estimated that over two-thirds of Indonesian drug injectors have hepatitis C, with about 60 percent to 90 percent of these also living with HIV. Co-infection with HIV more than triples the risk for liver disease, liver failure, and liver-related death from hepatitis C.

“By that point I was so weak that I had to resort to bed rest every few days,” he recalls. “I didn’t find out until years later that my HIV infection was worsening my liver disease. At the time, I lived in Salatiga, a small town in Central Java, where access to information about hepatitis and co-infection was very limited.”

Hepatitis C is preventable, treatable and curable. Effective, evidence-based strategies for preventing hepatitis C transmission among drug injectors include a combination of long-term, consistent provision of harm-reduction services like needle syringe exchange programs and opioid substitution treatment, and antiviral treatment for those who already have the virus.

“In Indonesia, these proven strategies are not implemented at the level or quality needed to have a significant impact on the explosive HIV epidemic,” says Suhendro Sugiharto, program manager at the Indonesian Drug Users’ Network (PKNI).

Research conducted by PKNI earlier this year among 240 members of the drug-using community across eight cities in Indonesia revealed that in contrast to government reports that existing harm reduction services reached nearly two-thirds of people who inject drugs, close to half of service beneficiaries reported never receiving any information on hepatitis C testing and treatment.

Twelve years after his diagnosis, Aris still hasn’t accessed antiviral treatment. In order to determine what treatment course and duration are most appropriate, he is required to undergo a series of diagnostic tests that, combined, cost up to Rp 6.5 million ($580) — almost three times the average monthly salary in Indonesia. Depending on which genotype he is infected with — there are six genotypes of the hepatitis C virus, each of which may respond differently to treatment — he could face costs up to Rp 144 million for treatment alone.

“I got the basic liver function tests because those are the cheapest. But the rest are too expensive for me,” Aris admits. “Although part of my stomach is permanently swelled up and increasingly painful by the day, I only take traditional herbal medicine. Even if I could cover the diagnostic tests and the huge cost of treatment, I am worried about the side effects and the interactions it might have with my ARV treatment.”

Hepatitis C treatment in several Southeast Asian countries, including in Indonesia, is licensed to pharmaceutical companies Roche and Merck.

On July 28, a group of 16 international and regional advocates, including PKNI, sent a joint, open letter to Roche and Merck to demand lower prices for peginterferon alfa in Asia. In his reply, Roche chief executive Severin Schwan acknowledged the role of treatment access in hepatitis care but stayed clear of mentioning price reductions as an option for facilitating such access. The groups are due to meet with the pharmaceutical company in the near future.

Officially, the Indonesian government publicly funds treatment for hepatitis C under a number of insurance schemes, including Askes, which covers health costs including treatment for hepatitis C for government employees, Jamsostek, which acts as social insurance for employers that choose to register with the scheme, and Jamkesmas, Indonesia’s health waivers for low-income individuals.

But the reach of existing insurance and support schemes is extremely limited. A majority of people either don’t know these subsidies exist or don’t qualify for them.

Speaking on Sunday at Aksi Hepatitis, an event held at Monas commemorating World Hepatitis Day, Indonesia’s Minister of Health Nafsiah Mboi announced that hepatitis C treatment will be covered by National Health Insurance beginning in 2014, in accordance with the 2004 National Social Security Law.

“This is an important step forward,” says the PKNI’s Suhendro. “But we need to make sure that such schemes facilitate treatment access for the most vulnerable among us, and that they do so with minimal bureaucracy attached. Hepatitis C among our community is a ticking time bomb,” he adds.

Indonesia does not conduct routine surveillance for hepatitis C, and that makes it challenging to assess the true scale of the crisis. It was not until 2011 that the Health Ministry established a national program focused on viral hepatitis, under the Sub-Directorate for Gastrointestinal Infections and Diarrheal Diseases.

“We are currently preparing an action plan for hepatitis control to be implemented between 2015 and 2019, as well as national guidelines for management of hepatitis C,” said Naning Nugrahini, who heads the sub-directorate. “We also plan to strengthen data collection and surveillance among most affected populations.”

A policy briefing launched on Sunday by the PKNI to coincide with Aksi Hepatitis demands that the government scales up its commitment to hepatitis by joining affected communities in negotiating price reductions with pharmaceuticals.

“I want treatment,” Aris says. “My dream is to see hepatitis C medication produced locally and affordably. Until pharmaceutical companies drop their patents, people will continue to die.”

Claudia Stoicescu is a doctoral researcher investigating sexual and drug injecting risk behaviors among women who inject drugs in Indonesia. She is based in Jakarta. Edo Agustian Edo is the national coordinator of PKNI (www.pkni.org).

Posted by Hepatitis C Research and News at 2:42 PM