Provided by Chemical and Engineering News

Patents: Merck & Co., too, claims a stake in hepatitis C drug from Gilead 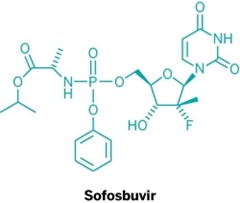 As Gilead prepares for the launch of sofosbuvir, a small-molecule hepatitis C treatment that is expected to rake in billions of dollars annually, competitors are angling for a piece of the action. The latest firm to come forward is Merck & Co., which alleges that sofosbuvir’s structure is covered by patents generated in its search for hepatitis C treatments.

According to the Centers for Disease Control & Prevention, roughly 3.2 million Americans are infected with the hepatitis C virus (HCV). Battling it traditionally required a harsh, nearly yearlong regimen involving daily doses of the antiviral medication ribavirin and weekly injections of interferon. In 2011, Merck and Vertex Pharmaceuticals both launched second-generation antivirals that, when added to the combination therapy, significantly shorten treatment time.

Sofosbuvir, which came to Gilead through its 2012 acquisition of Pharmasset, would be part of the first all-oral treatment for HCV. With the Food & Drug Administration likely to approve using the drug with ribavirin before the end of the year, analysts believe Gilead could see more than $2 billion in sales in 2014 and even more in the years ahead.

“If our projections for peak sales are accurate (over $10 billion), we are not surprised that many companies have pursued complaints against Gilead to either prevent launch or receive royalties,” Deutsche Bank stock analyst Robyn Karnauskas said in a note to investors.

In a letter dated Aug. 5, Merck notified Gilead that it would grant the firm a license to two patents related to sofosbuvir in exchange for a 10% royalty on sales of the drug. Merck asked for a reply by Aug. 31; Gilead filed a preemptive lawsuit on Aug. 30.

The Merck suit comes as litigation between Gilead and Idenix Pharmaceuticals winds through the courts. Merck and Idenix both claim that sofosbuvir is covered by their patents for families of nucleoside derivatives that block RNA viral polymerase.

Analysts think Merck and Idenix are unlikely to prevail. Sofosbuvir’s activity is due to a 2'-methyl, 2'-fluoro substitution on the sugar piece of the nucleoside, a specific feature that does not seem to be in either company’s patents, says Howard Liang of investment firm Leerink Swann. Indeed, Idenix lost the latest round of its legal fight against Gilead.

Posted by Hepatitis C Research and News at 7:12 PM