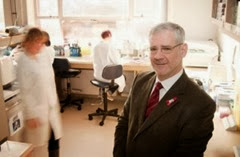 Dr. Julio Montaner is the director of the British Columbia Centre for Excellence in HIV/AIDS at St. Pauls’ Hospital.

A model for HIV treatment and prevention developed by the British Columbia Centre for Excellence (BC-CfE) in HIV/AIDS at St. Paul’s Hospital may also be the key to changing the course of the province’s hepatitis epidemics.

In March, the government of British Columbia announced the creation of a $1.5-million fund through St. Paul’s Hospital Foundation, which will enable the BC-CfE to explore ways to better address hepatitis B and C.

“With the support of the government of BC, we have led the way in the fight against HIV/AIDS. Now we hope to do the same with viral hepatitis,” said Dr. Julio Montaner, director, BC-CfE. “What we have done for HIV can and should be done for other high burden diseases like hepatitis. We can take the infrastructure we have developed under STOP HIV/AIDS and apply that so we can deliver a hepatitis-free generation to our province.”

Following the model pioneered by the BC-CfE, this project will focus on determining vulnerable individuals, identifying the best ways to prevent new infections and engage those at-risk or living with the diseases, and assessing the reach and effectiveness of new antiviral treatments.

Both viruses infect the liver and can lead to permanent damage, including liver cancer and failure. In many cases, no symptoms appear until the person’s liver is severely damaged.

“This funding will increase awareness and help us set up a province-wide strategy to combat these epidemics,” said Dr. Mel Krajden, medical director, hepatitis services, at BC Centre for Disease Control and professor of pathology and laboratory medicine, UBC.

Posted by Hepatitis C Research and News at 9:08 PM