ABT-450 combined with ritonavir, in addition to ABT-333 and ribavirin: A race for an interferon-free regimen to cure HCV infection

Abstract. Background: There is a need for interferon-free treatment regimens for hepatitis C virus (HCV) infection. The goal of this study was to evaluate ABT-450, a potent HCV NS3 protease inhibitor, combined with low-dose ritonavir (ABT-450/r), in addition to ABT-333, a nonnucleoside NS5B polymerase inhibitor, and ribavirin, for the treatment of HCV infection.

Methods: We conducted a 12-week, phase 2a, open-label study involving patients who had HCV genotype 1 infection without cirrhosis. All patients received ABT-333 (400mg twice daily) and ribavirin (1000 to 1200mg per day) and one of two daily doses of ABT-450/r. Groups 1 and 2 included previously untreated patients; group 1 received 250mg of ABT-450 and 100mg of ritonavir, and group 2 received 150mg and 100mg, respectively. Group 3, which included patients who had had a null or partial response to previous therapy with peginterferon and ribavirin, received daily doses of 150mg of ABT-450 and 100mg of ritonavir. The primary end point was an undetectable level of HCV RNA from week 4 through week 12 (extended rapid virologic response).

Conclusions: This preliminary study suggests that 12 weeks of therapy with a combination of a protease inhibitor, a non-nucleoside polymerase inhibitor, and ribavirin may be effective for treatment of HCV genotype 1 infection. (Funded by Abbott; ClinicalTrials.gov number, NCT01306617.)

Two direct-acting antivirals (DAAs), telaprevir and boceprevir, are given in combination with pegylated interferon (PegIFN) and ribavirin to genotype 1 HCV infected patients. PegIFN has several side effects and many patients are not eligible or have failed this treatment. Therefore, there is a need to develop an IFN-free regimen. Ideally, the future IFN-free regimen should have a high efficacy, favorable safety profile, and high barrier to resistance [1]. This article is discussing the impressive data from the IFN-free trial with ABT-450 based regimen [2], [3].

ABT-450 boosted with ritonavir (ABTr), in addition to ABT-333, and ribavirin for HCV genotype 1 infected patients (pilot and co-pilot studies)

The primary end point was the percentage of patients with undetectable HCV-RNA from week 4 through week 12 (extended rapid virologic response, eRVR). Secondary end points included patients with HCV-RNA below 25IU/ml at week 4 (rapid virologic response, RVR), at week 12, and 12weeks after the end of treatment (sustained virologic response (SVR)). SVR12 has been demonstrated to be as relevant as SVR24 under PegIFN/ribavirin [4]. COBAS TaqMan HCV Test, version 2.0 was used, with a lower limit of quantitation of 25IU/ml and a lower limit of detection of 15IU/ml.

Efficacy in patients with null or partial response to previous therapy

6 patients had virologic breakthrough during treatment, including 1 who mistakenly took only 50mg of ABT-450 daily for the first 3weeks and who never had an HCV RNA lower than 25IU/ml. Ten patients had an eRVR. Three patients had a relapse 2weeks after treatment, and 8 had an SVR12. 3/7 patients with a null response and 5/10 with a partial response had SVR12. In most cases, virologic failure was associated with the emergence of variants with substitutions in both NS3 and NS5B, at positions known to confer resistance in vitro to ABT-450 and ABT-333, respectively.

No deaths or serious adverse events occurred. One patient in group 1 discontinued drugs owing to aminotransferases increase at week 2. The elevated aminotransferase levels were not associated with an increased bilirubin level and improved after treatment. The most frequent events were fatigue, nausea, headache, dizziness, insomnia, pruritus, rash, and vomiting. Most events were mild. Four adverse events were classified as severe: fatigue, pain, vomiting, and hyperbilirubinemia. None of these events led to drug discontinuation.

The Aviator phase 2b study assesses the safety and efficacy of ABT-450/r, ABT-267 (NS5A inhibitor), ABT-333, and ribavirin in non-cirrhotic naïve patients and prior PegIFN/ribavirin null-responders for 8, 12 or 24

weeks (Fig. 2A) [3]. Results are summarized in Fig. 2B. For the 12-week triple-DAA regimen with ribavirin being studied in phase 3 trials: 96% of treatment-naive patients achieved SVR; and 93% of prior null responders achieved SVR. Comparable high response rates were obtained in the 12- or 24-week arms, supporting a 12-week treatment duration. Treatment was well tolerated. Four of 448 patients in the 8- and 12-week arms discontinued treatment because of adverse events. The most common adverse events were fatigue and headache. 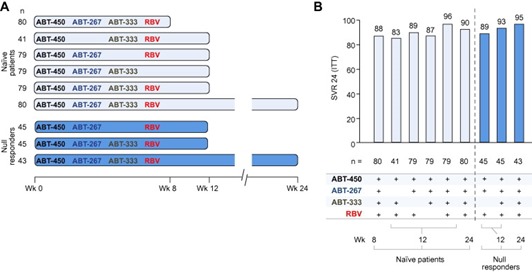 Discussion: what have we learned?

First, for naive genotype 1 patients without cirrhosis («easy-to-cure patients»), this preliminary study suggests that the all-oral combination of 2 DAAs (ABT-450/r, ABT-333), and ribavirin for 12weeks is associated with a high SVR rate. According to subtype, no virologic failures occurred among the 26 genotype 1a naïve patients.

Second, this regimen (ABT-450/r, ABT-333, and ribavirin) is less effective in null or partial responders to previous therapy («difficult-to-cure patients»). Extending the treatment duration beyond 12weeks may not be an option since most of the virologic failures occurred during treatment. We do not really understand why treatments including DAAs are less effective in treatment-experienced patients when compared to naïve patients, even in the absence of IFN therapy. Innate immunity may still have a role in HCV clearance with these DAAs [5]. For previous non-responders, more potent combination with different compounds may be needed. The combination of several DAAs (ABT-450/r, ABT-267, ABT-333, and ribavirin) in non-cirrhotic prior null-responders provides excellent preliminary results. Moreover, PegIFN may remain an option in previous non-responders (or as a rescue therapy), since a high SVR rate was achieved when two DAAs were combined with PegIFN/ribavirin [6].

Third, we will have to wait for more data, with a larger number of patients, including difficult-to-cure patients with cirrhosis and previous non-response. Of course, phase 3 studies will provide more information about safety, effectiveness, and drug-drug interactions, especially when several new drugs are developed in the same regimen (and ABT-450 is boosted with ritonavir).

Finally, ABT-450-based regimen showed impressive results. It is unclear whether ribavirin will remain an important agent. For easy-to-cure patients, “genotype 1b with mild disease”, ribavirin may be not useful. For difficult-to-cure patients, “cirrhosis with prior non-response”, an intensive regimen may be necessary.

The phase 3 program is ongoing. The DAAs in the studies include ABT-450/r (protease inhibitor and ritonavir), ABT-267 (NS5A inhibitor) and ABT-333 (non-nucleoside polymerase inhibitor). Treatment duration will be 12weeks in non-cirrhotic patients and 12 or 24weeks in cirrhotic patients. All patients will be followed for 48weeks post-treatment. Co-formulated tablets of ABT-450/r and ABT-267 will be used in phase 3 trials. (http://www.clinicaltrials.gov.)

There is a realistic hope for an oral regimen against HCV since several DAA combinations have reported interesting preliminary results (increased SVR, low resistance and a preliminary good safety profile) [7], [8], [9]. We have to take into account this important revolution, but remain cautious and await larger phase 3 data, especially regarding safety and drug-drug interactions. Finally, we wish a nice flight to Aviator, and we hope that in the near future an IFN-free regimen will be available for patients with HCV infection.

Tarik Asselah is a speaker and investigator for BMS, Boehringer-Ingelheim, Tibotec, Janssen, Gilead, Roche, and Merck.

Posted by Hepatitis C Research and News at 10:59 PM