Fibrosis in Patients with HIV and Hepatitis C

HIV infection does not speed the progression of fibrosis in patients with Hepatitis C, according to findings from Richard Sterling et al. in the December issue of Clinical Gastroenterology and Hepatology.

Sterling et al. compared liver biopsies taken from more than 300 patients with HIV/HCV co-infection and more than 200 with only HCV infection. They found that fibrosis progressed in 20% of HIV/HCV co-infected patients over time (10% by 1 stage and 10% by 2 or more stages)—this was not significantly different than progression in patients with only HCV infection (22%; 17% by 1 stage and 5% by 2 stages). Patients’ baseline features—such as inflammation or steatosis—were not associated with progression, nor were numbers of T cells, levels of HIV RNA, or any particular therapeutic regimen for HIV infection.

Limitations to the study include referral bias and self-selection for subjects that were willing to undergo a second biopsy. Furthermore, the authors were not able to account for alcohol use between biopsies and did not have accurate data on alcohol use in those with HCV alone. Although Sterling et al. did not associate any particular anti-HIV therapy with fibrosis, the specific regimen for each patient was not controlled, and the authors did not account for compliance or change in anti-HIV therapies between biopsies.

The authors recommend that all co-infected patients be repeatedly assessed for disease severity by liver biopsy analyses at periodic intervals. Because a significant proportion of patients with HIV and HCV did not have increasing liver damage, decisions on whether to begin HCV therapy should depend on patient compliance and likelihood of response, rather than concerns about rapid disease progression. Sterling et al. conclude that it is reasonable to defer HCV therapy in patients with mild disease until better therapies for HCV are available. 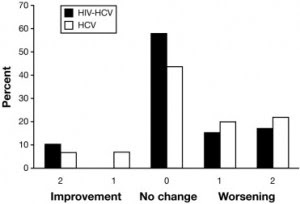 Source
Posted by Hepatitis C Research and News at 3:19 PM