Liver...The Largest Gland in the Body!

The liver is the largest solid organ in the body. I think a lot of people probably know that. But they may not know that it is also the largest gland in the body. You see, the liver is also considered a gland because, among its various functions, it makes and secretes bile. (Just for your reference, the stomach and intestine are large hollow organs. Glands are organs or parts of organs that make and secrete substances. And bile is a fluid that both aids in digestion and transports fats as well as waste products into the intestine.)

Actually, there are all sorts of glands in the body that make and secrete substances, including the pancreas (digestive enzymes), thyroid and other endocrine glands (hormones), gastric glands in the stomach (acid), and lymph glands or nodes (lymph). The liver is even larger, I think, than most mammary glands (milk).

So, how large is the liver?

You know, sometimes I'm surprised by how little information some people have about the liver. Therefore, in this article, I want to relate a few other special facts about the liver, which, I must admit, is my favorite organ.

Where is the liver located?
The liver is located just below the diaphragm (the muscular membrane separating the chest from the abdomen), primarily in the upper right part of the abdomen, mostly under the ribs. However, it also extends across the middle of the upper abdomen and part way into the left upper abdomen. An irregularly shaped, dome-like solid structure, the liver consists of two main parts (a larger right lobe and a smaller left lobe) and two minor lobes. As you can see in the diagram below, the upper border of the right lobe is at the level of the top of the 5th rib (a little less than 1/2 inch below the nipple) and the upper border of the left lobe is just below the 5th rib (about 3/4 inch below the nipple). During inspiration (breathing in), the liver is pushed down by the diaphragm and the lower edge of the liver descends below the margin of the lowest rib (costal margin). 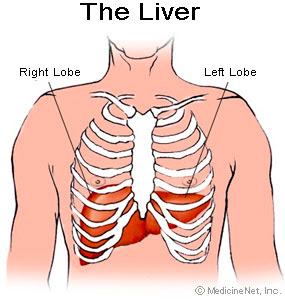 Just what does the liver do?

The liver has a multitude of important and complex functions. Some of these functions are to:

•Manufacture (synthesize) proteins, including albumin (to help maintain the volume of blood) and blood clotting factors

•Metabolize and store carbohydrates, which are used as the source for the sugar (glucose) in blood that red blood cells and the brain use

•Form and secrete bile that contains bile acids to aid in the intestinal absorption (taking in) of fats and the fat-soluble vitamins A, D, E, and K.

•Detoxify, by metabolizing and/or secreting, drugs, alcohol, and environmental toxins

What special features enable the liver to do so much?

The liver has many special features. For example, in order to carry out its secretory functions, ducts (tubes) closely connect it to the gallbladder and intestines. Thus, bile made by the liver travels through these tubes to the gallbladder. The bile is stored in the gallbladder between meals and then is discharged into the intestines at mealtime to aid in digestion.

For another example, the liver is appropriately situated in the body to directly receive the blood that comes from the intestines (portal blood). With this arrangement, the liver can readily process (metabolize) nutrients absorbed from food as well as other contents of the portal blood. Indeed, because of its numerous biochemical functions, the liver is considered the biochemical factory of the body.

What's more, the liver is organized strategically to coordinate its structure, including its blood circulation, with its functions. Four key features of this organization of the liver are as follows.

1.The basic unit of the liver is called an acinus (pronounced as' i-nus). (There are numerous acini in the liver.) In each acinus, the liver cells (hepatocytes) are grouped into 3 zones that are anatomically related to the liver's blood supply and drainage. Thus, the blood enters zone one first, and then travels through the second and third zones before leaving the liver. Each zone has its own special functions to perform. (Moreover, because of these different functions, as well as the different relationships to the flow of blood, the zones have different susceptibilities to injury.)

What diseases affect the liver?

The most common liver diseases are various types of acute (sudden) hepatitis (inflammation), chronic (long duration) hepatitis, fatty liver, cirrhosis (scarring), and cancer. Viruses, drugs, and alcohol, as well as metabolic, immune (defense) system, and genetic (hereditary) abnormalities are the common causes of these liver diseases. But note that, contrary to a popular misconception, alcohol is only one of the many causes of liver disease. Moreover, sometimes the cause of the liver disease is not known.

How do liver diseases cause symptoms?

•Fatigue that is of unknown cause, but may be related to some impaired metabolic function of the liver

What about blood tests for the diagnosis of liver disease?

Damage to the liver often gives rise to telltale abnormalities in certain blood tests (suggesting liver disease), the so-called liver blood tests (e.g., ALT, AST, and alkaline phosphatase enzymes). As a matter of convenience, the liver blood tests often are collectively referred to as liver function tests. But, as a matter of fact, abnormalities in only some of them (i.e., elevated bilirubin, low albumin, and prolonged prothrombin time) actually reflect, at least in part, abnormal function of the liver. And, it turns out that abnormalities of the other liver blood tests may reflect the actual injury to the liver. For example, viral hepatitis can cause the ALT or AST enzymes in injured liver cells to spill into the blood stream and increase their level in the blood.

Sometimes, the pattern of liver blood test abnormalities provides a clue as to the type of liver disease. For example, an AST to ALT ratio greater than two (as long as both are less than nine times normal) suggests alcoholic hepatitis or cirrhosis of any type.

Other blood tests are more specific for the diagnosis of particular liver diseases. For example, there are serological tests for most of the different types of viral hepatitis and immunological tests for primary biliary cirrhosis (antimitochondrial antibodies) or chronic autoimmune hepatitis (smooth muscle antibody). Additionally, there are special tests for hemochromatosis (iron-related tests), Wilson's disease (copper-related tests), and liver cancer (tumor markers).

Why does the doctor examine the liver?

The doctor examines the liver as part of the abdominal physical examination to try to gain helpful diagnostic information about a patient's liver condition. For example, the liver can be tender (painful to touch) with acute hepatitis or feel hard and irregular (bumpy) with cancer of the liver. Also, some conditions can cause the liver to enlarge (fatty liver or certain types of chronic hepatitis or cirrhosis), while others can make the liver smaller (advanced cirrhosis). You get the idea.

What about liver biopsy?

The most accurate way to diagnose the type of liver disease is by doing a liver biopsy, although a biopsy is not necessary in most cases. This procedure involves removing with a thin hollow needle a small piece of liver tissue for microscopic study. What's interesting about a liver biopsy is that the tiny sample is usually representative of the disease (pathology) in the rest of this large organ. Put another way, most liver disease involves the entire liver. When the disease is localized to only a small part of the liver, as for example, cancer usually is, the biopsy can be done with ultrasonic visual guidance to be certain that the small, involved area is biopsied.

What else can I say about the liver?

There's one other thing I want to say about this remarkable organ. And that is that the liver has an extraordinary capacity to regenerate (reproduce itself). For example, damage the liver, and it will soon regenerate in an attempt to restore its functions. Cut out a part of the liver, and it likewise will grow back (regenerate) rapidly. In fact, when a person donates a part of her or his liver for transplantation, much of the part that is removed will soon grow back!

Now, there's a famous story in Greek and Roman mythology that testifies to the liver's great capacity to regenerate. Witness Prometheus chained to a rock on a mountain. This confinement was his punishment because he had displeased the ruler Zeus (Jupiter, if you prefer Latin to Greek) by providing fire (and other benefits) to humankind. Picture a vulture pecking away at the liver of the helpless Prometheus. He survived, however, according to the legend, because his liver renewed itself as fast as the vulture devoured it. That's regeneration!

Well, I hope you now know a little more about the liver. And, perhaps you too will become a fan of the largest gland in the body.

Source
Posted by Hepatitis C Research and News at 10:26 AM